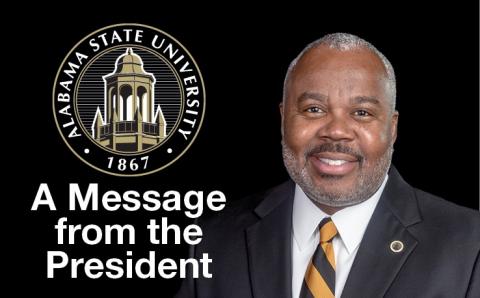 I am so excited to be able to share some good news with Hornet Nation. For the past few months, the fate of the Title III program that provides critical funding for the nation's Historically Black Colleges or Universities (HBCUs) has been in question.

Because of the importance of Title III to the future of so many Alabama State University students, I have been paying close attention to what has been going on in Washington regarding this program and have been working with our lobbyist, Pete Landrum, some of our representatives in Congress and other leaders in higher education to ensure that our students continue to have access to these funds.

Last evening, Senator Doug Jones called me to let me know that the Senate has reached an agreement on permanent Title III funding, and the legislation will pass out of the Senate with unanimous consent.  The measure will then go on to the house where it also is expected to pass. Additionally, the Senate approved legislation that simplifies the FAFSA application.

The news release below gives more information about this exciting development:

Legislation provides $255 million annually for HBCUs and Minority Serving Institutions, cuts up to 22 questions from the federal student aid application form, and eliminates bureaucratic verification nightmare for most students

“It’s hard to think of a piece of legislation that would have more of a lasting impact on minority students and their families than this bill,” Senator Alexander said. “First, it provides permanent funding for HBCUs and other Minority Serving Institutions attended by over 2 million minority students. Second, it takes a big first step in simplifying the FAFSA for 20 million American families, including 8 million minority students, and eliminating the bureaucratic nightmare created by requiring students to give the federal government the same information twice.”

“While this funding should never have lapsed in the first place, I’m glad that we were able to reach a deal that provides minority-serving institutions with the certainty of funding they deserve—and I truly appreciate the work done on both sides of the aisle to get us to this point,” Senator Murray said. “By permanently extending funding for these valuable institutions and streamlining our student aid system, this deal is a win-win. Now, I look forward to continuing to work with my Republican colleagues on efforts to overhaul the Higher Education Act in a comprehensive, bipartisan way that does right by all students.”

“The FUTURE Act will provide much-needed long-term financial stability to our nation’s HBCUs and other minority-serving institutions,” Senator Scott said. “I am proud to support this bipartisan solution, which reauthorizes HBCU and MSI funding without putting taxpayers on the hook, and which takes a vital first step towards streamlining and simplifying the FAFSA form. This bill is a win for students, families, and taxpayers.”

“The permanent renewal of federal funding is a huge win for our nation’s minority-serving institutions, which have faced growing uncertainty and anxiety since their $255 million in annual funding expired in September,” Senator Jones said. “Instead of making tough decisions to cut programs and staff this holiday season, they can now count on permanent funding that will enable them to plan long-term and focus on their educational mission. With our proposal today, we also take an important first step toward simplifying our federal student aid application and helping more students achieve the dream of a college education. I thank my colleagues Senators Alexander and Murray for working to find a bipartisan compromise on two issues that are deeply important to the people we serve.”

“North Carolina is home to more HBCUs than any other state in the nation,” Senator Burr said. “The number one concern for HBCUs is unpredictable funding. This amendment alleviates that problem by providing certainty not just for two years, but for many years to come. I applaud Chairman Alexander for leading the effort to better preserve these historic learning institutions for current and future students.”

“HBCUs have played a critical role in helping to ensure that every American is able to access higher education,” Senator Coons said. “I’m honored to work with colleagues from both parties to permanently fund these incredibly important American institutions.”

Background on the amendment: