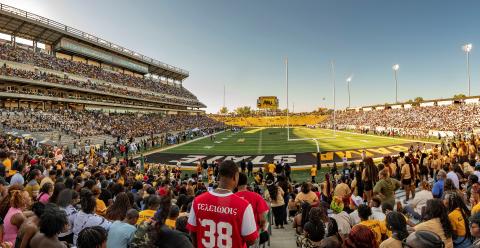 ASU's Homecoming Has Major Economic Impact on Montgomery and Region

- ASU had a 'Sold-Out' game and Chamber officials estimated a $4.2-million economic impact.

- ASU Stadium was filled to capacity for the showdown.

"O’ Mother Dear, Again we come to thee" are lyrics from Alabama State University’s alma mater -- and that was certainly the case on Saturday, Oct. 8 as “swarms” of black and old-gold clad fans poured onto the ASU campus for Homecoming 2022. The game was “sold out” days before the showdown between the Hornets and the Tigers of Jackson State.

"I was extremely proud of the way that Hornet Nation turned out for Homecoming this year. That Ole ‘Bama State Spirit was on full display,” said President Quinton T. Ross, Jr. “I was also proud of our team. The Hornets fought hard for all four quarters. And of course, the Mighty Marching Hornets Band definitely won the halftime show."

"It was a great time to celebrate Alabama State University’s Homecoming with my family, alumni, students and staff during last week’s festivities," Mayor Reed said. "As the mayor of Montgomery, I appreciate the scope of ASU’s economic impact on our region, especially during Homecoming Week. Local businesses see that impact firsthand. We are grateful to our partners at ASU as well as all of the friends and fans of the University who support Montgomery."

A top official with the Montgomery Area Chamber of Commerce shared its numbers, which demonstrate the significant economic impact that ASU's Homecoming celebration has on the Montgomery community.

"We witnessed a very, very large number of visitors here in the community and on the campus for Alabama State University's Homecoming game against Jackson State University, which saw huge numbers in the categories that we use to measure attendance and economics," said Ron Simmons, chief officer of Destination and Community Development for the Montgomery Area Chamber of Commerce.

Simmons said that game capacity was measured at 31,237 in and around the ASU stadium, with hundreds more outside the stadium in tailgate areas. Officials estimate that well over 14,056 out-of-town fans traveled to Montgomery to take part in the weekend of festivities.

Simmons estimates that ASU’s Homecoming had an economic impact of more than $4.2 million dollars and the event was responsible for selling out all of the city's downtown hotel rooms.