Alabama State University’s annual Turkey Day Classic Parade will take place on Thursday, November 28, at 9 a.m. in downtown Montgomery, followed by the kickoff of the 96th Turkey Day Classic football game against the Prairie View A&M Panthers at 2 p.m. in The ASU Stadium.

The Parade, a community-wide event, is steeped in the University’s and Montgomery's tradition. Thousands of families, students, and alumni from around the state and country line the streets each year to witness the pageantry, music, sights, and sounds of what has become one of the city’s most anticipated holiday festivities.

Only 20 decorated vehicles will be allowed in the Parade. Entry is based on a first-come, first-served basis. Decorated vehicles must have 75% of the vehicle decorated with the organization name prominently displayed on both sides.

All floats (and trailers being used as floats) must be completely decorated. A float is a decorated structure that is towed by a motor vehicle. All visible sides (including the rear end) must be completely covered with decorations. It must be constructed and decorated so that each side is equally attractive and interesting. The name identification of the parade entrant must appear on both sides of the float.

A group that marches while playing musical instruments. (Band units must provide name identification in front of the unit.) 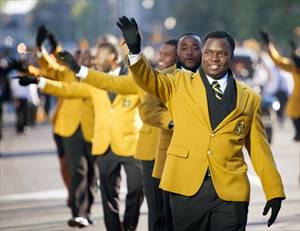 > A group, other than a band, that marches the parade route in costume or uniform. Those marching must be 10 years of age or older.
> Units must have a professionally printed banner with the group’s name (at least 2’ x 6’).
> Units must walk in an organized manner and wear similar colors or uniforms.
> Chaperones must accompany units with children under the age of 18 (1 chaperone per 10 children).

Groups and organizations that do not adhere to the above regulations will not be allowed to participate in the Parade and will not receive a refund for their registration. Eligibility will be determined by the Parade Committee, and all decisions are final.

The deadline for entry is Friday, November 1, 2019. We thank you for your interest in the Alabama State University Turkey Day Classic Parade. If you have any questions, please contact Demetriana Knight at parade@alasu.edu. 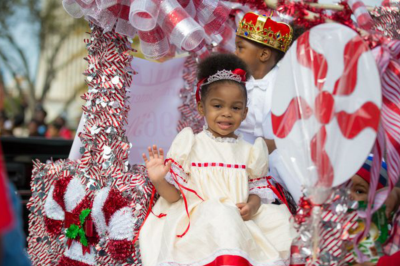 The Parade began in the 1940s and was coordinated by former ASU professor Dr. John Garrick Hardy. It was established to increase attendance at the annual Turkey Day Classic football game. The Parade fostered pride in ASU and fellowship within the community then and now.

The original parade route included streets on ASU’s campus and streets in nearby neighborhoods. Homeowners and businesses decorated their homes, streets, and storefronts during Homecoming week. The increased size of the parade prompted a route change and now starts at the Alabama State Capitol building and proceeds down Dexter Avenue.

Preparations for the Parade have been a community and team event from the beginning. University graphic artists designed the floats, University personnel built them and decorations were added by students, professors, alumni and friends from the community. These teams of workers often labored through the night, finishing just in time to line up for the parade.

The morning of the parade is an energetic and exciting time. Volunteers converge on downtown Montgomery in the early morning hours. More than 100 volunteers from the faculty, staff and community serve as Parade Marshalls. They supervise the lineup and make sure that the Parade participants are in place when it is their time to proceed down Dexter Avenue. These dedicated volunteers are the reason the Parade is organized and proceeds according to the plan.

Register for the 2019 Turkey Day Classic Parade!
Deadline to register is November 1, 2019

Have questions regarding the Turkey Day Classic Parade?