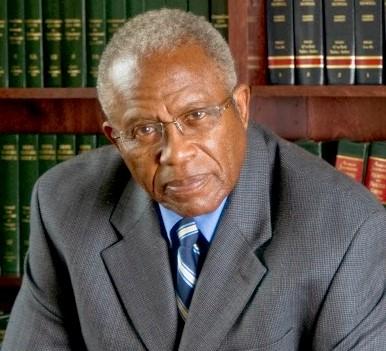 The nation's oldest black scholarly organization (founded in 1915) held its three-day national meeting in Montgomery beginning on Sept. 29 and as part of the event, the group presented its most prestigious award to two highly acclaimed members of the Hornet Nation family. Attorney Fred D. Gray, Sr. (ASU 1951) and the late Dr. Ralph J. Bryson (ASU faculty member) were both named as recipients of the coveted "Luminary Award" from the Association for the Study of African-American Life and History (ASALH).

The chairman of the University's department of History and Political Science, Dr. Derryn Moten, a member of the ASALH, explained that the awards were conferred during the plenary session of the conference on Sept. 29.

"Both of these gentlemen richly deserve this important award that recognizes the outstanding work and significant contributions each made to African - American history and culture," Dr. Moten said. "Both individuals and their early and consistent accomplishments heralded them as important pioneers in their own right within the black community."

Attorney Gray stated that to be recognized by such an austere organization caused him to stop and give thanks.

"I must thank the Association for the Study of African-American Life and History for bestowing upon me such a unique and public honor. In so doing, I must first and foremost give the ultimate appreciation and thanks to God, from whom all things cometh," Gray said. "I would be remiss in not also noting that my law career began as a student at Alabama State when a professor of Political Science inspired me to study law and to do my best to curtail and to end the practice of segregation in Alabama and America."

Moten stated that both men cut a significant swath in the history books — Bryson through African-American culture and literature, and Gray within the hallways of law and government.

"Attorney Gray is one of the nation's most preeminent and successful civil rights attorneys ever; who started his illustrious journey by representing Rosa Parks shortly after her arrest for refusing to give up her seat on a segregated Montgomery city bus; who also served as Dr. Martin Luther King, Jr.'s lawyer who filed and won some of the most important civil rights cases in the history of the United States from New York Times v Sullivan to the Tuskegee Syphilis Experiment case; and who recently was bestowed the nation's highest civilian honor, the Presidential Medal of Freedom by President Biden in the East Room of the White House," Moten shared.

Moten added "ASU's Dr. Bryson's significance is also important as he was among the first cohort of modern academic leaders whose leadership and intellectual prowess helped propel the study of African-American literature from his beginning on ASU's faculty in 1952 and helped place it into the mainstream study of literature at America's majority white institutions of higher education in the 1960's. One also must remember his close personal and academic collaboration and friendship with the famous ASU English professor and civil rights luminary, Professor Jo Ann Robinson, who helped organize the Montgomery Bus Boycott."

MORE ABOUT THE ASALH SUMMIT IN MONTGOMERY

In addition to honoring members of Alabama State University's family; several hundred academic leaders and scholars came together from across the United States to Montgomery for the ASALH's three-day national meeting summit, which focused on African-American health and wellness and the impact of racial disparities throughout American history.

The conference also featured a session led by renowned musician and Alabama State University alumnus, Fred Wesley, and educator Scot Brown called "Remembering the Roots of Funk: An Oral History" as well as several presentations on Alabama culture and history, including "Southern State Legislation 2022: The Panic Over Critical Race Theory and the Future of Academic Freedom," led by ASU's Moten, who discussed constraints placed on the teaching of African-American history.

For a complete schedule of the conference: https://asalh.org/conference