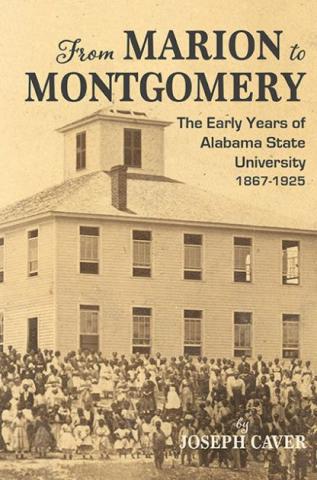 - Joseph Caver's book from "Marion to Montgomery" chronicles ASU's history from 1867 till 1925.

The preorder period is now open for the long-awaited book titled From Marion to Montgomery by Alabama State University alumnus, historian, author and lecturer, Joseph D. Caver (class of 1974). Caver has published an all-inclusive book about the origin and history (1867-1925) of one of America's earliest and most significant Historically Black Colleges or Universities, which is Alabama State University.

Caver's book weaves and illuminates the story of how nine freedmen (The Marion Nine) in Marion, Ala., founded The Lincoln Normal School, which later moved to Montgomery and is now known as Alabama State University (ASU). Caver's book chronicles how ASU’s early leaders, including a Scottish national named William Burns Paterson; George Washington Card and others, laid the foundation for the University and how ASU’s history developed up to 1925. Caver leaves no stone unturned as he reveals highlights of the University’s turbulent history in Marion and its 1887 move to Montgomery, and tracks various political and social challenges with a conclusion just prior to the Great Depression.

"The history of ASU is important because it mirrors the history of African-Americans in this nation and our community's desire to obtain the American Dream, which is to get a good education, make a decent wage, become full-fledged citizens and fulfill the dreams of the Marion Nine," Caver stated.

To preorder Caver’s book, From Marion to Montgomery, visit: http://www.newsouthbooks.com/frommariontomontgomery