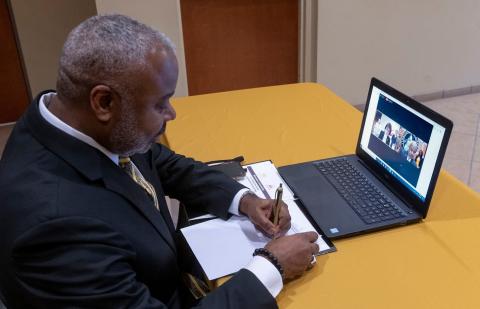 - The agreement provides a pathway for Gadsden State students to enroll at ASU and obtain a bachelor's degree;

- It is among the very first virtual signing agreements between Alabama institutions of higher education.

The Presidents of both Alabama State University (ASU) and Gadsden State Community College (Gadsden State) signed a formal transfer articulation agreement - memorandum of understanding (MOU) - on May 13, which provides a pathway for qualified Gadsden State students to study and earn undergraduate degrees from ASU.

The agreement was announced at one of the very first "virtual" joint news conferences held between Alabama institutions of higher education with both ASU President Dr. Quinton T. Ross Jr. and Gadsden State President Dr. Martha Lavender signing the MOU for their respective schools.

ASU PRESIDENT SAYS AGREEMENT WAS “MADE IN HEAVEN”

ASU's President said that the May 13, agreement was one that was “made in heaven” to benefit students.

"We are excited about our pioneering the virtual signing of the joint Memorandum of Understanding between Alabama State University and Gadsden State Community College that gives interested students at Gadsden State an opportunity to obtain a four-year degree from ASU," said President Ross. “This is a great partnership between our two schools and it is all about student success,” Ross added.

Gadsden State President Lavender said the agreement formalizes an educational path that benefits the students at the Gadsden-based two-year college, which also has campuses in Calhoun, Cleburne and Cherokee counties.

"This partnership offers a seamless manner that benefits our two schools and helps students achieve additional success and an even more competitive position in the job market, which is a positive aspect of this agreement," Lavender said.

The live May 13, virtual signing ceremony that was streamed on Facebook and YouTube is among the very first virtually-held formalized agreements held by two institutions of higher education in Alabama. Initially, the signing ceremony was to be held on Gadsden State's campus in April, but due to the COVID-19 pandemic, the event was moved to social media.

PURPOSE OF THE JOINT 'MOU' AGREEMENT

The University's interim assistant provost for Academic Affairs, Dr. Tanjula Petty, worked with both schools to put the agreement together.

"Alabama State University has been making great strides in reaching out to serve the greater community in creative ways, which includes inviting students from neighboring community colleges, such as Gadsden State Community College, to attend ASU," Petty said.

"This agreement demonstrates how ASU and Gadsden State are working together to meet the educational needs of the students at each school. We are honored to be a partner with Gadsden State in this endeavor," Petty stated.

IT'S ALL ABOUT STUDENTS SAYS ASU'S PRESIDENT ROSS

The entire agreement is about student success, via a great partnership between the two schools, says ASU's Ross.

The agreement went into effect immediately upon signing by both presidents.