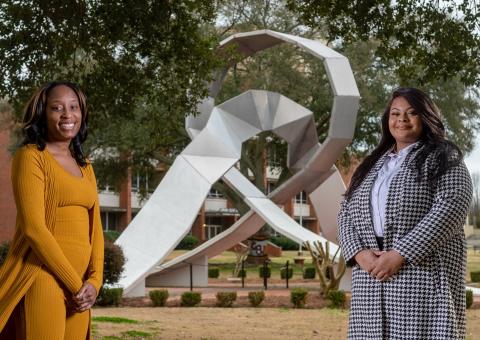 - ASU seniors Rachel Williams and Hali Cameron are among 12 chosen nationally for this ambitious project.

Hearst Magazines has selected two Alabama State University students to be part of its ambitious new national project to report on the lifelong experiences of America's African-American seniors. The students selected for what Hearst executives refer to as "Project Tell Me" were chosen by the media giant to be freelance writers to report on the seniors’ personal stories, learnings, lessons, perspectives and advice, which they have amassed through participating in historic or regular events within the African-American community.

ASU seniors Rachel Williams and Hali Cameron were both selected as Project Tell Me free-lance reporters to write and file a series of stories on both famous and ordinary Black senior citizens.

"At Hearst, we are gearing up for a fairly ambitious oral-history project, the mission of which is to engage deeply with Black elders across the country to celebrate and learn from their life experiences, to deepen connections to the past, and prepare for a better future," wrote a  Hearst official, in an email.

ASU's two students selected for the project say that they are honored to have been given such an opportunity.

Hali Cameron, a Notasulga, Alabama native, who is a senior majoring in print journalism, stated, "It feels amazing to be able to do something like this project for Hearst that will have my articles published nationwide. Coming from a small town like Notasulga and now having the Hearst Corporation in New York City put its trust in me by selecting me for this project allows me to now feel that I can do anything, be among the best, which is a dream come true," Cameron said.

"It is humbling to be selected, and I am most appreciative of the opportunity that has been given to me by Hearst, which Alabama State University has made me well-prepared to undertake, through its great faculty engagement with me and by the care that they show us," Williams stated.

The chair of ASU's Department of Communications, Dr. L. Simone Byrd (a 2020 Fulbright Scholar), was among those at the University who helped recommend the students who were sent to Hearst for the competitive selection process.

"I am thrilled for ASU students to have this opportunity to be involved with such important magazine titles as those that are owned by Hearst," Byrd said. "With Hearst having selected members of the ASU student family to write and report on a series of topics that are enmeshed in diversity, equity and inclusion is important," Byrd stated. "This is the kind of recognition that puts our students and this University on the international stage."

Hearst hopes to select a total of a dozen students to work on this project on a freelance basis.

Hearst shared that the people being interviewed by the students will be both famous and not; roughly 50 in all. Interviews will be edited for print use in Hearst Magazines and for a book — and, if all goes according to plan, Hearst Television will produce individual video segments of some of the interviews.

ASU IS THE REASON I HAVE THIS ASSIGNMENT

Cameron believes that without being a student at Alabama State University none of this would have occurred for her.

"ASU is the reason that I am where I am today. I owe the credit to ASU for what I have learned from my professors and for all of the encouragement they have given me and for the opportunities that have come my way," Cameron said by phone.

"I am super excited to be writing for Hearst Magazines but without ASU and Dr. Byrd in my life, I wouldn't be where I am today."

ABOUT THE HEARST CORPORATION

Founded by publishing giant and American tycoon William Randolph Hearst in 1903, Hearst Magazines is one of the world's largest publishers of magazine media across all platforms, with more than 300 editions and 245 websites around the world, including more than 25 titles in the U.S. alone.