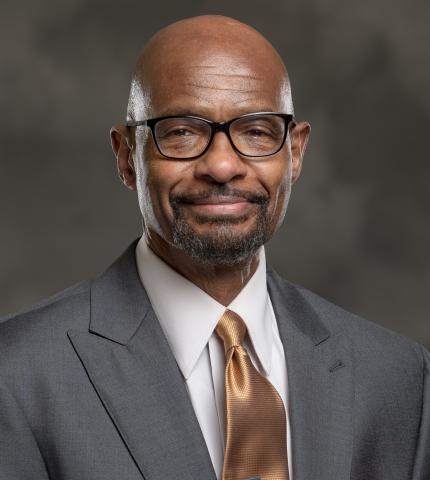 The general counsel of Alabama State University was inducted on May 21 into the prestigious Alabama Lawyers Association’s (ALA) Hall of Fame.

In the first virtual ceremony ever held by the ALA in its 50 years of service, ASU’s general counsel, Kenneth L. Thomas (ASU Class of 1973), joined the ranks of the organization’s Hall of Fame inductees. Past honorees have included iconic jurists such as Fred Gray, Sr. (ASU Class of 1951), Judge U.W. Clemon, Solomon Seay, Sr. and Judge Myron Thompson.

“Winning this award and special recognition by my peers represents one of the major pinnacles of my career and has afforded me great satisfaction and unending gratitude to my fellow attorneys who selected me,” said Thomas, a practicing attorney since 1979.

Joining Thomas in this year’s class of inductees are Earnestine Sapp and Rosa Faya Toure.

THOMAS TOUTED AS 'GREAT' BY THE GROUP’S OFFICERS

Angeline Sperling, the ALA’s newly sworn-in president, stated that Thomas represents all that is honorable about the legal profession.

“Kenneth Thomas is diligent in his decisions and his follow-up is impeccable,” Sperling stated by phone from her law firm in Birmingham. “He is everything that is good about the legal profession and forthright in all of his dealings with clients and opposing counsel. Our nominating committee for this honor was also very impressed with the many important cases that he has represented over the years, many of which involved both civil and human rights.”

Before becoming the University’s legal counsel, Thomas was both in private practice and represented non-governmental organizations before the courts. He also was a partner in the acclaimed Montgomery law firm of Thomas, Means, Gillis and Seay.

The past president of the ALA, Leon Hampton, Jr., a partner with the nationally renowned, Montgomery-based law firm of Beasley & Allen, said that Thomas deserves this accolade and more for his sterling record of service.

“When you look at Attorney Thomas’s length and quality of service as a lawyer and the landmark cases he has been involved with from the local circuit court all the way to the U.S. Supreme Court, you understand why he was selected to be made a member of our Hall of Fame,” Hampton stated.

Among the notable legal cases with which Thomas is associated include:

·         John F. Knight, et al. v. State of Alabama, a 1991 federal lawsuit in which he and others represented both Alabama State University and Alabama A&M University in landmark litigation challenging the vestiges of segregation throughout Alabama’s system of public higher education.

·         Roderick Jackson v. Birmingham Board of Education, a 2005 case in which Thomas presented an oral argument before the United States Supreme Court on behalf of the Birmingham Board of Education. In this landmark case, the court ultimately held (5-4) that Title IX of the education amendments, which prohibits discrimination in federally assisted education programs and activities, provided for a retaliation cause of action.

HE BELIEVES ASU MADE THIS HONOR POSSIBLE

Thomas, an alumnus of Alabama State University (bachelor’s degree in 1973 and a master’s degree in 1980), said he and his five siblings all earned degrees from ASU.

“I attended ASU from kindergarten all the way through obtaining my master’s degree, and it is fair to say that all that I have ever known academically was Alabama State,” Thomas said.

“ASU has educated and fostered me, and I credit it for tremendously helping me establish the foundation for all that I have been able to accomplish in life.”

ABOUT THE ALABAMA LAWYERS ASSOCIATION

The Alabama Lawyers Association (formerly known as the Alabama Black Lawyers Association) was organized in 1971. The organization’s purpose is to encourage the study of law, to provide support services and networking opportunities for members to enhance their effectiveness as legal counsel, and to protect the civil and political rights of all citizens.