From Grandfather to Grandson, Love of ASU Runs in the Family 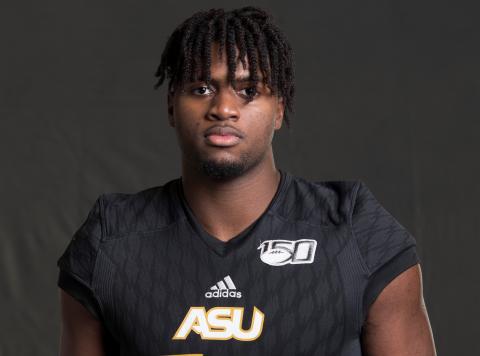 Christian Lee, a student-athlete at Alabama State University, has family connections to the University that go back several decades.

Christian is the grandson of former ASU President Joe A. Lee, who served as the University’s 11th president for seven years (2001-2008).

“Granddad is known as an experienced leader, scholar and a dedicated educator. To me, he is just a regular granddad,” Christian said.  “We are very close. I talk with ‘pops’ often.”

Christian said when he tells people he’s the grandson of the former ASU President, their reaction is priceless.

“They usually say ‘Oh, wow! Really? You must be smart.’ And then they start questioning me if I’m rich,” Christian said with a chuckle.

The ASU family connections also reach back to his grandmother, Margie Lee, who was ASU’s First Lady and an ASU alumna (’68), and his dad, Joseph Lee, an educator who worked at ASU in the ‘90s in the Triage Department.

His granddad’s unwavering love for Alabama State University is one reason Christian chose ASU over the University of Arkansas at Pine Bluff, Columbia University and Colgate University. Another reason – to have that ASU experience his granddad talked so much about.

“I decided to come to the place that my grandparents called home.  Now it’s my home. My grandfather loves Alabama State University, as evident from the years he served as president.  I hope he is pleased that his grandson is attending the college where he was once president,” Christian said.

Dr. Lee said his grandson was considering several universities and, he was glad that ASU was on that list.

“I was so happy, just thrilled when he told me that he selected ASU. I know he was offered scholarships from several institutions. Both his parents attended Florida A&M and everybody, including me, assumed he would go to Florida A&M. It’s a testament to HBCUs,” Dr. Lee said. “ASU holds a special place in Christian’s heart. This is a very special time for me.”

Dr. Lee said he has a special bond with both his grandsons.

“Christian would spend the weekends and sometimes the summers with us,” Dr. Lee added.  “After Christian’s younger brother was born, they both did.”

Christian pointed out that he can finally say that he understands the HBCU experience.

“It means connecting with young black folks from all around the world, blossoming, creating memories that will last a lifetime and building foundational steps for my desired profession,” the freshman Hornet said. “Also, I see what my granddad saw when he was here – a good school.”

Christian got an early introduction to a life in education when he visited his granddad as a youngster.

“Pops would bring me to his office at ASU all the time.  Both my granddad and my family encouraged the love of learning,” Christian said.

“When I was giving my acceptance speech at my ASU inauguration, Christian, who was very young, was talking out, calling my name. I heard someone say, ‘That’s his granddad on stage,’” Dr. Lee said with a hearty laugh. “Christian continued to talk out. He was saying hello to his pops. Christian and I are very close. He knows the President’s Office and the President’s House because he’s been there; he lived there.”

Following in his family’s footsteps as an educator is not a certainty for Christian.

“I don’t know if that’s the road I will travel. I’m working on my own journey to success at this moment. I want to be in hotel management,” Christian said, who is pursuing a business management degree.

Christian said he would be remiss if he didn’t mention his mom, Wanda Lee Luanda, who is an educator, and younger brother, Kerring, for their constant support.

In Christian’s senior season at Dwyer High School in Palm Beach, Gardens, Florida, he recorded 65 tackles, 11 sacks and one interception, and broke up 11 passes.

He brings that same energy to the ASU football field.

“I’m happy to share the field with my talented teammates,” he said.

Christian is ​​giving his all on the field and in the classroom.

“I have all A’s and B’s right now,” Christian said proudly.