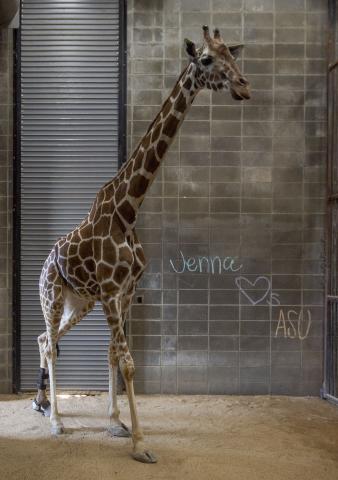 ASU’s Department of Prosthetics and Orthotics (P&O) program has helped the Montgomery Zoo improve the quality of life for one of the facility's giraffes.

The ASU team used 3D scanning technology (CAD/CAM) to create an orthotic brace on the 17-year-old’s left rear leg. Jenna, who injured the fetlock joint of her leg many years ago, was originally fitted in 2010.

“The orthosis serves to dramatically decrease any pain she is experiencing at her fetlock joint and even at her hip joints, which we hope increases her quality of life. As the animal uses the device over the first year, we will continue to collect feedback from zoo personnel to get a full picture of what positive effects have been realized, or even what more can be done,” said Scott Bretl, who serves as the director/department chairman of ASU’s Prosthetics and Orthotics program. Bretl added that this is the first animal that ASU’s P&O team has assisted in a formal capacity.

Zoo Veterinarian, Dr. Kanyon McLean, said when Jenna injured herself, her long-term health management included an orthotic brace to encourage movement and support of her limb.

“That (original) brace served her very well for many years, but with the advancement of science and resources that we have available to us, the brace that was constructed for her years ago was in need of repair. So, we decided to investigate updates in orthotic medicine to see if there was a part that could be developed to allow more mobility in the leg at this time,” McLean said.  “When we decided to fix the brace, the stars must have aligned because Mr. Ryan Funderburk from ASU called to ask if we had any projects for his students.”

A collaboration was born.

“This was literally a cold call on my part. I thought it would be a good opportunity for our research group if we ever got to work with animals at the zoo…. When I finally got in touch with the Vet we have been working with, she was ecstatic because Jenna had an immediate need and the Zoo was looking for help,” Funderburk said.

The ASU P&O team stepped in to work with the Zoo staff and started a research project to test the feasibility of capturing a 3D scan of Jenna’s leg. Traditionally, hand casting methods were used that required that the animal would be sedated to create a mold of its leg.

“This (casting method) was a bit stressful on the animal and anyone working in the environment. So, using a scanner was very important to the Zoo because this (process) may create a safer way to create orthotics for animals,” Funderburk emphasized.

The process had challenges, Bretl noted. “When you are that close to such an animal, the animal is really the one in control - and you respect her personal space and personal preferences. There were some days that fitting simply could not happen because she was not in the right mood.”

Funderburk said the team eventually captured the scan after lots of trial and error. “That scan is what was used to carve a foam model of Jenna’s leg and the fabrication of the actual orthosis could begin.”

The design of the orthosis began this past fall. “The students fabricated an initial version and then proceeded through a fitting process, gaining feedback from zoo personnel to learn as much as possible about Jenna — her condition, her personality and her overall needs as a captive giraffe. "We sometimes (gained information) from Jenna herself,” Bretl said.

McLean said it’s been almost two years since ASU faculty and two student research groups have been working with the Montgomery Zoo.

“This was a big deal for us because we were trying to find ways to minimally touch her to get this done…So, when we found out that they (ASU O&P team) had this cool 3D scanning option, we were like ‘let’s try it,’” McLean stated. “As far as I’m aware, this is the first time in the zoological community that a 3D scanning device was used on a giraffe to create a brace.”

Jenna, who stands about 15 feet tall, received her new brace in April 2022.

“Right now, our research group is getting feedback that Jenna is quicker and more stable, and it is pretty incredible to realize that these observations are a direct result of the work of our students. We are extremely proud of their tireless efforts,” Bretl acknowledged.

McLean said she hopes the collaboration on Jenna's case will make a difference at other zoos.

“The cooperation between two prestigious entities in the city of Montgomery, both the Zoo and the college, has significantly enhanced Jenna’s quality of life. It’s amazing how things can come together when we put multiple specialties in the same room to talk through a problem,” McLean said.