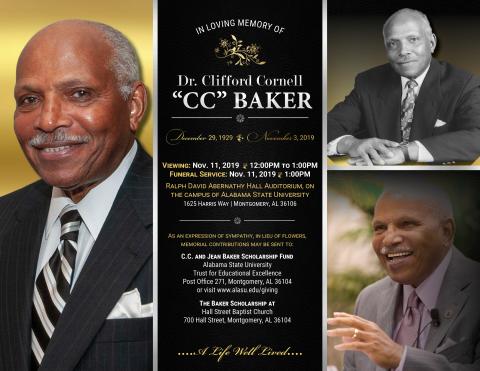 The funeral service for former Alabama State University President, Dr. Clifford C. Baker, will be Monday (Nov. 11) in ASU's Ralph David Abernathy College of Education's auditorium that is located at 1625 Harris Way, which is on campus. Viewing will be from noon to 1 p.m and the funeral service will begin at 1 p.m. Dr. Baker passed away on Sunday (Nov. 3), after an extended illness. Baker served from 1991 to 1994 as the University’s ninth president.

ABOUT PRESIDENT BAKER
The renowned educator earned two degrees from ASU: the Bachelor of Science in mathematics in 1954 and the Master of Education in 1956. He earned his Doctor of Education from Auburn University in 1973. Prior to his tenure at ASU, Baker had a distinguished career as an educator at various levels, including classroom instructor, principal in two school systems, Head Start program director and as a varsity coach.

At the state level, Baker served as assistant state superintendent of education from 1976 to 1989, an appointment that marked the highest position ever held at that time by an African-American in Alabama’s State Department of Education.

When Baker came out of retirement to become president of his alma mater, the University experienced unprecedented growth, including the accreditation of the College of Business Administration (COBA), the re-accreditation of the social work program, the opening of the Olean Black Underwood Tennis Center and C. J. Dunn Tower, and the dedication of the Acadome.

PRESIDENT ROSS COMMENTS ON BAKER
“The name C. C. Baker will forever be revered as a part of this University’s history,” said President Quinton T. Ross Jr. “He was a man of great vision who led the University with a passion that stemmed from his great love of his alma mater." “Dr. Baker was a mentor to me as I served as Student Government Association president during his tenure and throughout my professional career in education. I am proud to say that he also was my beloved friend who set an exemplary standard of excellence for those of us who are blessed to follow in his footsteps. The University is grateful for his unwavering support of ASU, even after his presidency had ended. Our thoughts and prayers are with his wife, former First Lady and ASU alumna, Alma Jean Baker, and their family during this time,” Ross added.