​​Former NFL/ASU Superstar Gives Back to Hometown for Thanksgiving 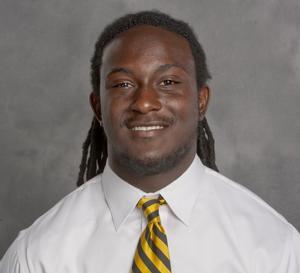 Thanksgiving kicks off the season of giving and one Alabama State University alumnus is getting into that giving spirit by spending Turkey Day eve feeding those in need.

Former NFL running back Isaiah Crowell and his Feed the Crow Foundation will once again bring Thanksgiving a day early (Nov. 23) to hundreds of men, women and children in his hometown of Columbus, Georgia.

“It is great to see this holiday tradition is still going strong. It’s important to me to give back to the community where I grew up. It’s a blessing to be a blessing to someone else, especially during my favorite holiday, Thanksgiving,” Crowell said.  “That’s really why I do it.”

This is Crowell’s seventh year hosting the “Feed the Hungry” event at the Safe House Ministries in Columbus. For the first five years, Crowell distributed free turkeys; however, in the last two years, he decided a hot Thanksgiving meal would serve those in his community better. The event fed between 200 to 300 people last year and Crowell hopes to reach a higher goal this year.

“Every year, we just try to do more and feed more people. I just try to keep on giving back.  Making a difference in the lives of those who need it gives me and those involved in 'Feed the​ ​​Hungry' a strong sense of purpose and gratitude," he said.

The day will feature a menu of Thanksgiving goodies including ham, turkey, collard greens, macaroni cheese and more. Guests will be entertained with music during the event

Crowell pointed out that the cost of a holiday meal, like all meals, has risen dramatically this year, which makes this holiday tradition more impactful for families in Columbus experiencing hunger

Crowell credits Alabama State University and his mom for installing the importance of having a servant's heart.

"Alabama State University inspired me to become a servant-leader.  I had faculty and staff members who supported me, guided me and inspired me, like Ms. Eulys Hunt…It definitely added to what I already had from my family and mother,” he said. “I’m thankful for everything and for the people at Alabama State for being there for me throughout my time there."

The Columbus native was a star running back on ASU's football team, where he earned first-team All-SWAC honors twice and scored a league-best of 30 touchdowns. A transfer from Georgia, he chose to enter the NFL Draft early after two years playing for ASU. He spent seven years in the NFL, playing for the Cleveland Browns, the New York Jets and the Oakland Raiders.