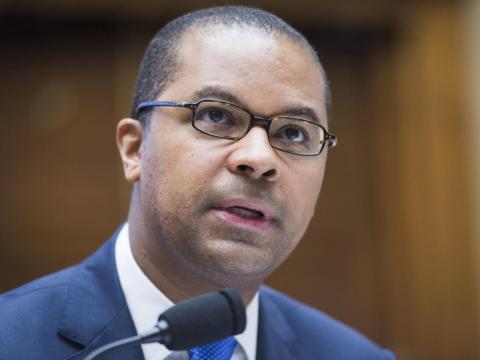 A member of the Federal Communication Commission (FCC) will visit Alabama State University on Feb. 18, and participate in a panel discussion on broadband access.

FCC Commissioner Geoffrey Starks, will be the keynote speaker at the ASU event. Joining him will be State Senator Bobby Singleton of Greensboro, who serves as the Senate Minority Leader of the Alabama State Senate. He is an alumnus of The Alabama State University. Also in attendance will be Selma's Mayor, the Honorable Darrio Melton.

The panel on broadband access will be held at ASU's Ralph D. Abernathy College of Education auditorium from 10 a.m. - 11 a.m.

The event is co-sponsored by the ASU College of Liberal Arts and Social Sciences and the ASU Department of Communications.

Geoffrey Starks was nominated to serve as a commissioner on the Federal Communications Commission by President Donald J. Trump and was unanimously confirmed by the United States Senate. He was sworn into office on January 30, 2019. Commissioner Starks has a long career of public and private sector experience.  Most recently, he served as assistant bureau chief in the FCC's Enforcement Bureau, where he focused on protecting consumers, promoting network security, and preserving the integrity of the Commission's Universal Service Fund programs. Previously, he served as senior counsel in the Office of the Deputy Attorney General at the U.S. Department of Justice (DOJ) where he provided advice on domestic and international law enforcement issues, including civil, criminal, and national security matters. At DOJ, he received the Attorney General's Award for Exceptional Service, which is the highest award a DOJ employee can receive. Prior to his entry into federal public service, Commissioner Starks was an attorney at the law firm of Williams & Connolly. He clerked for the Honorable Judge Duane Benton on the Eighth Circuit, U.S. Court of Appeals, and served as a legislative staffer in the Illinois State Senate.

He is a native of Kansas and was born in Kansas City, Missouri. Commissioner Starks earned a Bachelor of Arts degree from Harvard College with high honors, and a law degree from Yale Law School.