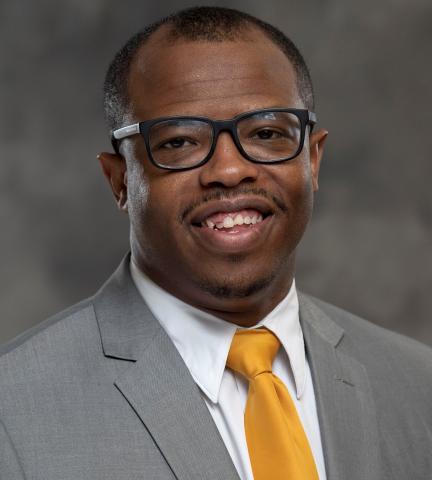 - Television Academy to send Professor Eric Knox to Hollywood at the end of October.

An instructor in Alabama State University's department of Communications - Professor Eric Knox - has been named by The Television Academy Foundation as an Alex Trebek Legacy Fellowship Fund honoree. The award provides Knox with an all-expenses paid trip to Hollywood, Calif., to attend the foundation’s national conference at the end of October, which will allow him to study the latest in television communications, techniques and technology.

Knox is both an alumnus of ASU and a native of Marion, Ala., growing up within one mile of where the University was founded in 1867. He is excited to receive the Trebek Award.

"I am very excited to have won this award given by The Television Academy Foundation (Academy) in honor of one of its most iconic TV personalities, Jeopardy's late host Alex Trebek," Knox said. "This is a big accomplishment for me as a new professor here at Alabama State University. I always worked in TV, but to see it from the educator’s side of the lens is rewarding and fulfilling since I am more able to help students."

COMMUNICATION CHAIR SAYS TREBEK AWARD IS GOOD FOR MANY REASONS

The chairman of ASU's Department of Communications, Dr. William Robinson, said Knox's recognition will advance many aspects of his department's outreach and better enrich his students.

"This is certainly an added value for many aspects of the University, which includes Mr. Knox, our department, our College and the University. It certainly speaks volumes to his past, current, and future contributions to the television arts and sciences and for our students," Dr. Robinson said. "Professor Knox is a valued product of the ASU communications program. Programmatically, the Department of Communications is in a rebuild and rebrand mode, and I am excited to lead this team of scholars and professional experts as we build upon its legacy to prepare our students who are the next generation of content creators and digital storytellers."

ALL ABOUT BETTER SERVING ASU'S STUDENTS

The Trebek Fellowship begins in late October. Knox explained the information he gathers there, coupled with his ASU education and the experience he gained at Birmingham's WBRC Fox-TV 6 and Montgomery's WSFA TV 12, will benefit ASU's students.

"The important thing to me is that this provides more insight and data that helps lift-up our students’ learning communication skills, which is something they will use every day for the rest of their lives," stated Knox. "The field is changing at a very fast pace, and the most important thing that we can do as educators is to keep our students updated on the latest cutting-edge technology. I believe that learning from the Academy and attending its conference in Hollywood will help me as a professor to better hone my skills as a communicator and as an educator, and thus, to better serve our students here at Alabama State University."

ABOUT THE ALEX TREBECK FELLOWSHIP

The Television Academy Foundation in Hollywood, Calif., created The Alex Trebek Legacy Fellowship with the help of a large financial contribution from longtime "Jeopardy!" executive producer Harry Friedman, as well as from The Harry and Judy Friedman Family Foundation. The award provides a select number of fellowships to college educators and allows them to attend the Foundation's annual three-day faculty conference, which connects college classrooms with the television industry by providing media professors with curriculum-enhancing seminars on the latest in the art, science, and business of television.
"Judy and I are extremely grateful to the Television Academy Foundation for creating the Alex Trebek Legacy Fellowships," said Harry Friedman. "They will serve as a lasting tribute to our dear friend's life and work. Much like Jeopardy! itself, the Foundation's programs use the power of television to educate and to celebrate and reward knowledge."