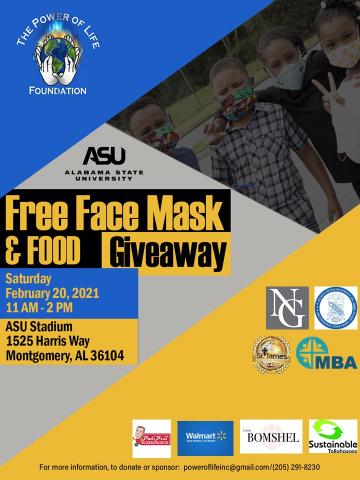 Lane Harper, an actor, a Birmingham police officer, a humanitarian and an ASU alumnus,  is leading  an initiative through his organization, the Power of Life Foundation, by teaming with Alabama State University to host a drive-through event to give out free face masks and food from 11  a.m. to 2 p.m. on Saturday, Feb. 20, at the ASU Stadium, 1525 Harris Way.

The giveaway is open to the public. Because of COVID-19 considerations, volunteers will bring masks, food and information pamphlets to the attendees, who will be required to remain in their cars.

“This is my way of giving back during the COVID crisis,” said Harper, the founder and executive director of the Foundation.  “We will give out 30,000 free masks and (give food to) between 800 to 1,000 families. We want everybody to come who hears about it,” he said, adding they also will pass out COVID-19 information.

To keep the event on a high note, a DJ will be on hand to entertain those waiting in line in their cars. “It will be explosive,” Harper exclaimed.

The Michigan native, who studied criminal justice at ASU, pointed out that it was important to form this partnership with ASU. “ASU is my school. You have so many people who have done well and not give back. I wanted to give back to the school that gave so much to me,” he said.

Since the pandemic began,  Harper said the Foundation’s mission has been focused on the new life-saving initiative, “It’s COOL to be Covered,”  to encourage the public and school kids to wear face masks to help reduce the spread of the COVID-19 virus.

ASU officials emphasized the University has a proud history of community engagement from students to employees to alumni like Harper. “Our partnership with the Power of Life Foundation expands our CommUniversity mission of building upon the University’s tradition and commitment to develop and maintain programs that are responsive to the needs of individual citizens, public groups and agencies in the city of Montgomery and surrounding areas,” said Kenneth Waters, coordinator of Marketing and Communications in the University’s Division of Marketing and Strategic Communications.

Harper said he did his first initiative at Legion Field last year. “Traffic wrapped around Legion Field twice. If I could do it there, I could bring that type of vision to Alabama State and bring recognition not only to the Foundation but to the University as well. Maybe people will drive through ASU who never been on campus before,” he said.

Giving back is not just a term for Harper, it’s a passion that he lives every day as a Birmingham police officer and instructor/trainer for the Birmingham Police Department.

“I want to make a meaningful impact by blessing those who need help,” he said.  “It’s always good to give something back because you never know where your blessings might come from.”

As a testament to giving blessings, Harper’s Foundation has adopted the McCall family in Birmingham, a single parent home with 12 children.

Harper, who has been in law enforcement for more than 20 years, is known in his community as the officer with the “big heart.” While on his beat in Birmingham’s East Precinct, Harper gives out brand new shoes and clothing to people in the community who appear to be in need. He uses his own money to buy the items.

“I created the Power of Life Foundation last year to expand my mission to provide basic human needs for those needing help in Alabama,” he said.

Now the Foundation has expanded to Georgia and Florida. “I want to come into as many communities as I can to bless and cover people with one face mask at a time to save lives,” he added.

Harper said he strives to be approachable and build trust within the community he polices, much like the officers he knew growing up.

“We had officers that grabbed the milk cartons and brought them to our doors,” Harper said. “That’s how old I am.”

In Harper’s spare time, he has had a chance to show his family and friends his other passion – acting.

He traded his uniform for a tux to walk the red carpet for the preview of his new movie directed by Mann Robinson, “Justice on Trial: The Movie,” in which he portrays civil rights activist Medgar Evers.

Harper said he also starred in the traveling Off-Broadway play.

“From 2019-20, we traveled across the world doing the play. It’s such a great honor to be blessed and be able to be put in the position I’m in to try to make a difference by performing in a play,” he said.

The movie can be viewed on Amazon Prime. “The movie theaters are closed, so this is the platform most movies are taking.”

Harper’s resume is extensive and diverse. He started working for the BPD in 2008 and his previous assignments have included the homicide unit, a task force, mayor detail and the police academy. He also teaches criminal justice at Yale University, as well as to local police officers.