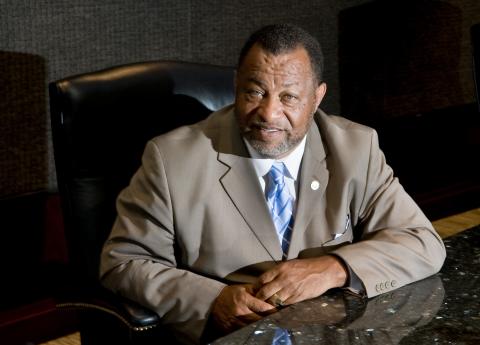 Two public ceremonies will be held this weekend to honor the memory of alumnus and community leader, Elton N. Dean, Sr., who died on June 7, 2022, at the age of 72.

Dean, who was the former chairman of the Alabama State University Board of Trustees, also was a longtime Chairman of the Montgomery County Commission. Dean’s constituents, friends and supporters will be able to pay their respects to the community leader on Friday, June 17, as he will lie in state at the Montgomery County Courthouse from 1 to 6 p.m.

Dean's body also will lie in state at the ASU's Dunn-Oliver Acadome from 10 to 11:45 a.m. with funeral services starting at noon.

“Chairman Dean was a true public servant and servant leader, and though I know so many of us are heartbroken by his passing, I am eternally grateful for our partnership on behalf of the citizens of Montgomery County, Alabama and blessed to have been guided by his membership as well as his friendship over the years,” Sewell said in her address. “May his family find comfort in knowing that Elton Dean’s legacy will live on in the hearts of all of those he impacted.”

Dean’s family has requested that in lieu of flowers, well-wishers may donate to the Elton N. Dean Memorial Scholarship that has been established by the Alabama State University Board of Trustees. Donations may be made by visiting www.alasu.edu/ChairmanDean.