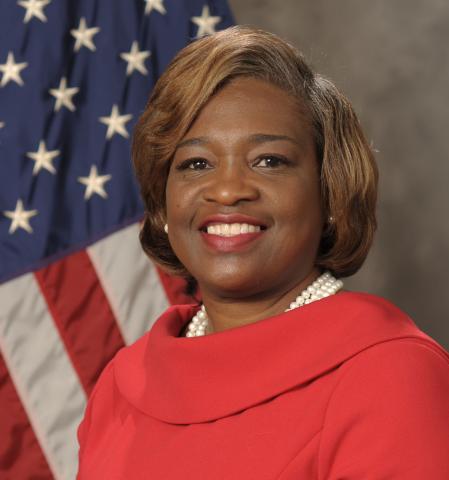 “To know that I was selected out of a sea of creative, brilliant, and innovative teachers motivates me to continue to do my part to ensure excellence in education for every student, every day, everywhere,” Tucker said. “I'm grateful for the opportunity to represent the Pacific East.”

The DoDEA Teacher of the Year (TOY) Program is modeled after the National Teacher of the Year Program (NTOY), sponsored by the Chief States Schools Officers. This program provides an avenue for all state TOYs to be nationally recognized and compete for the NTOY. The NTOY and all state TOYs are presented at the White House. The DoDEA TOY travels to all NTOY activities and takes a semester-long sabbatical to design and implement a project of choice.

Tucker says she also is proud to represent the HBCU community.  Historically Black Colleges and Universities (HBCUs) are known for producing more with less, said Tucker. And performing well, she stated, gives everyone in her area of influence an opportunity to experience and benefit from an HBCU; specifically, Alabama State University.

“Every time I transition conflict into resolution or meet the learner needs of students, my peers get to experience my ASU. My body of work is consistent with the ‘Black and Gold Standard of Excellence’ that’s embedded in me from matriculation at O’ Mother Dear. Alabama State University provided me with a rich, rigorous, robust learning experience. Not only was I challenged, but I also was pushed to rise above challenges and taught to think critically and problem-solve through adversity,” Tucker explained.

In 2004, after returning from deployment in support of OPERATION Iraqi Freedom, Tucker joined DoDEA, and was assigned to Misawa, Japan. She brought a wealth of experience and knowledge gained during her many deployments as a U.S. Army Reservist and DoD civilian.  As a reservist, Tucker served as a combat journalist where she facilitated English as a Second Language training for Iraqi civilians working with U.S.-led coalition forces. During subsequent deployments with the Civilian Expeditionary Workforce, she facilitated professional development for English as a Second Language in Afghanistan.

Tucker pointed out that teaching in these war-zone countries was a call to duty, rather than an inspiration.

“When I first began teaching in war-torn environments, the United States of America was at war, and I was a U.S. Army soldier sworn to protect the ideas of the United States of America against all enemies both foreign and domestic. In living up to that creed, I found myself tasked with improving the English skills of host-nation interpreters working with U.S. coalition forces,” Tucker said.

Tucker was credited with opening the first English Language Training Center for Afghan Women, revamping the curriculum for the Girls’ School in Mosul, Iraq, and providing professional development for English teachers in Djibouti, Africa.

When asked if she would teach again in those war-zone countries, the Coosada, Alabama native replied  “absolutely.”

Hailing from a long line of ASU graduates, Tucker said ASU gave her the foundational skill set to grow her craft-knowledge and become proficient in both journalism and teaching.

“Now, as an educator, I entered the professional workforce as a journalist,"​ she said, adding that she wrote for the Montgomery Advertiser.​

While at ASU, Tucker was the news editor of the Hornet Tribune and the lead writer for what was then the Hornet Gazette.  She was also a member of the ASU cheerleading team from 1986-89 and served as its captain from 1987-89.

“As co-captain, my captain (Jeanne Newson Buckholtz) and I coined the chant A- for Alabama S-T-A-T-E- University – ASU!”

Tucker is “blissfully” married to Kinsley Tucker.  They share a merged family of four: Kindra, Kedra, Zachary, and Charity.