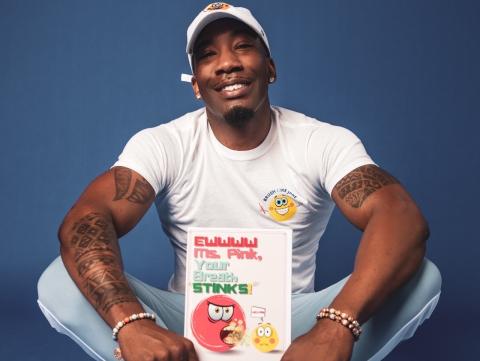 Having trouble getting your kids to brush their teeth?  You may find the answer in a humorous new children’s book, titled “Ewwww Ms. Pink, Your Breath Stinks!" written by 2010 ASU alumnus and Dekalb County Educator, Henry K. Davies Jr., a father of four.

The 35-page book is a light-hearted children's book about personal dental hygiene.   The setting is a school with the main character, Jake, trying to get his classmates, especially his teacher Ms. Pink, to practice dental hygiene in order to get rid of bad breath in his school.

“This book, which is geared toward elementary to middle schoolers, is designed to teach kids about proper dental hygiene and the importance of brushing their teeth,” said Davies, who is a full-time middle school Exceptional Education Social Studies teacher.  “All students can relate to it. It’s a fun way to learn how to properly brush.”

Davies, who is also the book’s illustrator, said the book contains a three-week brush chart (Monday-Friday) to help parents get their children in the habit of brushing and flossing. “It helps children to become consistent in their dental hygiene journey.”

Davies is a prolific and effervescent teacher and author who says his ongoing career has become multifaceted.  “I wear a lot of hats: actor, social activist, track coach, youth pastor, business owner (Davies La Fourth, LLC), award-winning singer and songwriter (YGEA Award and the Gospel Choice Award), choreographer and entrepreneur. They call me a renaissance man.”

To add to his busy schedule, Davies said he also is a comic book writer.

“I have my series coming out this fall. It’s a faith-based series. The characters are based on people I’m around every day, including my family. It’s going to be really special. I want to have the book on shelves alongside Marvel and D.C. comics…to eventually make it into a cartoon and down the line, a movie.”

Davies said his love of comic books and illustration started at a very early age.

“I’ve always had a passion for the arts. I was in fourth grade when I started to draw popular cartoon characters by hand and sell them to my classmates during lunch period,” Davies said. “By the end of lunch, I made a few dollars. This period was the time I really honed in on my talents as an illustrator. I had a knack for it, and it turned into a business.”

Davies said he owes his success to Alabama State University.

“My first hit was about ASU (‘Bama State Anthem’) and was made at Alabama State University….It made it to the radio and was No. 1 on Hot 105’s (Montgomery radio station) Countdown list for three or four weeks. It was up there with Beyonce and other big name singers. We had people from other schools singing the Bama State Anthem who weren't even from ASU. That’s really what kick-started my professional solo career…In 2010, I transitioned from secular to Gospel music.”

ASU, he acknowledged, "provided the inspiration to succeed...I joined a wonderful fraternity, gained lifelong friends, and most of all, I found my beautiful wife at ASU. ASU also allowed me to do other things outside of my major, which was PR. ASU opened doors for me.”

While at ASU, Davies helped create the University’s first-ever student radio station on campus (HD2: Bama State Radio) in 2009 and was the station’s first live radio personality and DJ.

“…I created the format of how the show should be; I basically kick-started the first student radio station at Alabama State…It eventually picked up steam…and became one of the most popular stations in the state.”

Davies, who did his last show with HD2 in 2015 from his Atlanta home, said initially the show would book local, unsigned artists, but eventually booked major artists such as Juvenile and​ Montell​​ Jordan. “We also got to highlight ASU talent. There were a lot of talented ASU singers and rappers. We even highlighted authors.”

“This was my first book, but it won’t be my last,” Davies emphasized. “I plan to write a sequel to ‘Ewwww’ which will come out later this year. I am also doing a project, writing a soundtrack, that will tie in with my comic book.”