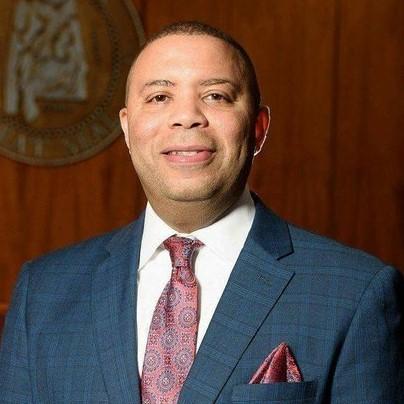 ASU alumnus, Danny Carr (’94), has been awarded the CrimeStopper of the Year Award for Metro Alabama. The award was given by the board of directors of CrimeStoppers, Inc., the anonymous-witness organization that helps law enforcement solve crimes with tips from citizens.

Carr, who was a standout Hornet scholarship basketball player, also holds the distinction of being the first African-American elected as the district attorney (DA) of Jefferson County, Alabama (Birmingham). Carr was presented with the crime-fighting award at a special ceremony in Birmingham. The award is presented to an individual who has accomplished the most in fighting and curtailing law breakers and criminal activity in a metropolitan area in Alabama.

"To win this award feels surreal to me since according to the statistical data, a person like me, who grew up in one of the poorest parts of Jefferson County, to a single parent family, in an area that was known to have one of the highest percentages of criminal activity, yet despite all of that, my family produced a person who won this award and who serves as the county's district attorney and chief prosecutor," said Carr. "I give credit for this award and my being the DA to God, to a mother who raised me right and to receiving a great education by attending and graduating from The Alabama State University."

Carr is a graduate of Birmingham's Jackson Olean High School and Alabama State University. Upon graduation from ASU, he attended Miles College School of Law, passed the Alabama Bar examination and immediately went to work as an assistant district attorney in the Jefferson County District Attorney's Office. He has worked there his entire adult legal career in a variety of legal positions, including being a senior trial attorney, division chief, and chief assistant district attorney before serving as interim District Attorney. Carr was elected District Attorney in 2018, beating the incumbent in a special election to become the chief law enforcement officer of Alabama's largest city.

The former ASU athletic scholarship recipient gives a great deal of the credit for his success to "O’ Mother Dear."

"Attending Alabama State did much more than give me a firm academic foundation, it also taught me how to be successful in life, the importance of hard work and a deep appreciation of how many, especially me, stand on the backs of giants who led our community, state and nation throughout the modern civil rights movement and achieved freedom, equality and equal justice under the law for our community with many of Dr. King's most important and valiant leaders being fellow alumni and faculty members of ASU," stated Carr.

Carr's mother, Regina Carr Hope, is very happy that her son won the CrimeStopper of the Year Award.

"All of his life, Danny wanted to be an attorney and it all began after he sat down with me in the evening and we watched the Perry Mason television show. He said then and there that he wanted to be an attorney after being exposed to the law through that show," said Ms. Hope. "Danny has been both a great athlete and a fine student throughout his life. The year he took the Law School Admissions Test, he earned the highest test score of any student statewide and now, he has won this big CrimeStopper Award, which he well deserves.

"Also, like many in Jefferson County, crime has touched our family, too. My son and Danny's brother, Jackstin Carr, was murdered during a car-jacking during his freshman year of college right here in Birmingham. I am certain that has also been a motivation for Danny to work hard to stop crime," stated Carr’s mother.

"We are an ASU family and are proud to tell anyone who asks us that we are Hornets," Ms. Hope exclaimed.

CARR IS A HORNETS FAN AND MAGIC-CITY CLASSIC TAILGATER

Danny Carr explained that although being the district attorney of Jefferson County is a 24/7 job, he still follows and supports his alma mater and attends as many athletic events as he can throughout the year.

"I love everything Alabama State, and I am especially looking forward to tailgating at the upcoming Magic City Classic game where I will be in my RV from Thursday through Saturday, cooking out, fellowshipping with my old and new friends, and cheering on our Hornets football team. I am all about the total ASU experience and this award that I just won is indicative of the great academic and ethical education that I received at Alabama State University," Carr said.