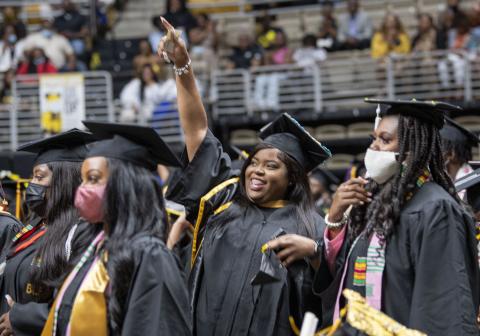 To succeed, the Chief Executive Officer of Real Times Media (RTM), Hiram Eric Jackson, told excited spring graduates to live a bold and courageous life during Alabama State University’s 2022  Commencement on Friday, May 6,  at the Dunn-Oliver Acadome.  The ceremony was moved to the Acadome from the ASU Stadium, now the official venue for all commencements, because of  earlier forecast of inclement weather.

During the ceremony, The Golden Class of 1972 was honored and a cadet was commissioned as 2nd Lieutenant in the United States Air Force.

Jackson, who has a successful 30-year career in business and as a community activist, addressed the graduates across two in-person ceremonies that included a celebratory walk across the stage by spring graduates and the class of 1972 members, and live conferring of degrees. The ceremony had live and prerecorded elements.

Jackson told the class he had prepared a different speech for today, but changed his mind after his two sons thought talking about his life from 22 to now, about his ups and downs and how pulling yourself out of struggles to succeed would be a better speech.   “So, I decided to share a little light on my path to see if you can get some pointers from it,” he said.

Jackson said when he decided to become an entrepreneur, he quit a  successful job to follow his dreams and got actively involved in the community where he networked with politicians, judges, businessmen and other community leaders. That path eventually led him to create a hundred-million-dollar technology company.

“I  looked up and I had a successful business, was an emerging leader in the community…Then came a six- or seven-year period I call  the dark years  that I struggled.”

Jackson noted during that period,  he had a son who was born a little over 1 pound at 23 weeks, his father died, his wife was bedridden for eight months,  and the successful company he built went bankrupt.

“On top of all that, I was diagnosed with kidney cancer….I’m not going to tell you that I didn’t want to give up; it was hard but I’m standing here strong… and today,  I own one of the most important black media companies in the country,”  Jackson said. “God is good!”

“What I’m saying to you is build a life with purpose. Build a vision-driven life. Build a life that is built on supporting and being a resource for your community because I would not have made it without the help of black people….they pulled me up and made sure that I was successful.  Success…will come from the relationships that you build. If you work hard and play by the rules, God will bless you.”

Do the grimy work.  “There are no shortcuts,  you have to put in the work to get where you want to go…When you are in your  20s and you are building relationships and you learn your craft that is what’s going to save you when you go through your trials and tribulations…Don’t cheat yourself, do the grimy work.”

Never fear failure. “Failure is part of success. You learn from failure…Failure is part of the process. If you live long enough, you will fail a lot. Don’t be scared to try. Give it your best shot and if you fall short  and if you are hanging out with the right crew, they will pick you up and say let’s keep rolling. So, remember, live a bold and courageous life,  don’t be scared to try, and don’t let anything keep you from your dreams.”

The Class of 2022 sat in the middle of the Acadome facing the stage; some sat quietly while others vigorously waved to parents and friends in the audience. Their joy in celebrating this phase of their education was evident.  Large video screens captured screams, smiles and more waves as this year’s graduates prepared to receive their diplomas and embark on the next chapter of their lives.

Before taking the long-awaited walk,  the spring graduates watched the  Class of 1972 take the Acadome stage for their historic moment as President Quinton T. Ross, Jr. presented their Golden diplomas.

Ross told the graduates that they are the next generation of civic-minded, globally conscious, creative thinkers and innovators who will create positive change in the world.

“As you prepare to depart, I charge you to leave with an assignment. I encourage you to seize every opportunity to rise to higher and higher levels of professional and personal success…As you go out into the world, be an example of the values we share here at Alabama State: pride, integrity, making an impact on your community…and be loyal to your family, community and O’ Mother Dear, The Alabama State University,” Ross said.

The ASU Commencement ceremonies were live-streamed on the University’s YouTube channel.  The Commencement was a mask mandatory event.