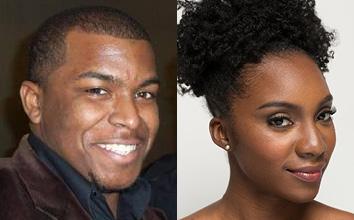 Other alumni in the movie included Zack Lee, an Izzi Soldier Dancer, and Dirk Forbes, also a dancer.

“Coming 2 America,” the sequel to Murphy’s 1988 comedy film “Coming to America,” is one of many movies that were made for theatrical release this year but, due to the COVID-19 pandemic, shifted to a streaming release instead.

The sequel tells the story of Prince Akeem Joffer (Murphy) who is set to become King of Zamunda when he discovers he has a son he never knew about in America – a street-savvy Queens native named Lavelle. Honoring his royal father’s (James Earl Jones) dying wish to groom this son as the crown prince, Akeem and Semmi (Arsenio Hall) set off to America once again.

Spencer, who is a teacher in Atlanta, appears in several scenes as a musician who plays the tuba in Joffer’s royal orchestra. He said he enjoyed his Hollywood ​stint ​and said he was in good company with first-class actors.

“I’m in the third scene and one of the last ones toward the ending. When I was cast, they had the identity of Murphy’s movie under another name, the ‘Quest.’  I was getting fitted and filling out paperwork with other actors, and the person actually over the administration walked in and asked, ‘Do you guys know what movie this is?’ When he told us the real name, I was very excited; my energy almost went through the roof when I found out it was Eddie Murphy’s picture,” he stated. “I shook hands with Mr. Murphy and told him I met his late brother when I had a gig in an  Atlanta club.

Spencer said his musical journey started when he was a college student at Kentucky State University. ​

"The band traveled to South African, We got a chance to meet the family of (Nelson) Mandela and tour South Africa. That pretty much started my whole adventure of being a musician,” said Spencer.​ ​

​When Spencer returned from South African he transferred to Alabama State University.

​"​When ​I ​returned from South Africa ​I ​had a completely different perspective of life. I wanted a change of atmosphere and that’s where Alabama State University came into play. When I got to ASU in 2008, It had the biggest band that they ever had in the history of the school. I was part of that freshman class.”

​Spencer​, ​a ​professional musician, private music instructor and technology expert, said so far, he hasn’t experienced any bumps in the road.

“The journey has been amazing,” said Spencer. “To have music as a lifelong career has been truly amazing. I’ve had some great experiences. I thank God for all the blessing he has bestowed on me thus far.”

Spencer’s movie credits include “Drumline,” “The Quad” and ​​Beyoncé and Jay-Z​'s​ On The Run II & Coachella Music Fest concerts​,​ which won a Grammy for Best Music Film. He has also played with the Montgomery Symphony Orchestra and has done professional studio recordings, and performing with entertainment firms.​ ​He is currently active as a musician with Orchestra Noir, Johnboy & Surround Sound, the Atlanta Junkanoo Group​. ​ ​O​n top of his entertainment career, Spencer said he and hi​s wife’ has written a  children's book that will be published this summer.

Spencer gave a shout-out to those who have helped him on his journey—his mother, all of his band directors, teachers and Alabama State University.

“I’m a die-hard ASU fan. I have a lot of pride in the school. I proposed to my wife at the Turkey Day Game in 2009. She was a student at Tuskegee. We’ve been together for more than nine years,” he said.

“Eddie Murphy, Salt & Pepper and some other stars shared the same hair/makeup trailer. it was an opportunity of a lifetime,” Renea added.

Renea is a professional dancer, choreographer and expert in African Dance. She was 1 of 11 women out of 500 chosen for the movie.

“I  was so excited to get the part. I watched the original ‘Coming to  America’ when  I was younger. To be a part of the sequel was pretty amazing.”

Renea is an assistant professor of dance and artistic director of the BFA Dance Program at ASU,

She earned a bachelor's degree in dance and a minor in music from Howard University. During her senior year, she joined the Garth Fagan Dance Company in Rochester, NY, and became a principal dancer. She also has a master's degree in choreography from ​Jacksonville University.​

Renea's choreography has appeared on international stages, including the Muda Africa Dance Company in Tanzania.

“’Coming 2 America’ is my first feature film, and I definitely would do another movie if the chance arises,” she said.

Renea was an adjunct faculty member in the dance program at Youngstown State University and is currently an Alabama Council of the Arts fellow in dance and choreography.

She thanks her Youngstown roots for preparing her for her success. “It takes a village to get you to the next level. So far, I’ve had an amazing career. I’ve been on the concert stage…I’ve  been able to tour.”

Because of her experiences on the set of the movie and working with very talented actors and choreographers, Renea has created a dance program named Dosabama.

“It allows students to learn from professionals in how to create dance on screen, especially now since we are living in a more virtual world because of the pandemic. They can produce, create and choreograph their own content and express their own voice. I saw the need for that type of training because that is something that hasn’t been available until now,” she explained.