The ASU-CVRL focuses on various aspects of behavior that cause, promote, maintain, reinforce and/ or are a consequence of Black-on-Black violence (BOBV). We define violence as forms of harm that are most commonly understood as a patterns of behavior intended to establish and maintain control over family, household members, intimate partners, colleagues, individuals or groups and often reflect an imbalance of power between the victim and the abuser. Violence and abuse may occur only once, can involve various tactics of subtle manipulation or may occur frequently while escalating, and/or retaliating over a period of months or years. In any form, violence and abuse profoundly affect the health and well-being of the individual, family and community. We further argue that BOBV is rooted in the many types of structural inequality experienced within the racial caste system of America. We are guided by a humanistic-existential philosophy that empowers community members to search for the meaning of their lives through free will, choice, and personal responsibility; therefore, we view violence as a choice that is preventable. We further argue that by engaging in the externalization of blame so often found in traditional conspiracy theories linked to white supremacy will ultimately result in the development of an external locus of control, lack of hope and passive nihilism so often observed in Black Communities of concentrated poverty. We are clinically informed by evidenced- based strategies that promote the development of innovative assessment and prevention strategies specifically tailored for the unique cultural needs of those we serve.

The Evolutionary Track deals with the immediate and intergenerational transmission of traumatic squealae within the slave community that have shaped harmful traditions, core beliefs, attitudes, ideas and thoughts associated with current dissociative psychopathology, PTSD and BOBV. This track also compares and contrasts principal BOBV- related statistics during key historical epochs, or windows, as follows: from slavery to the 13th amendment; from Jim Crow to the Civil Rights Era/Integration; and from Post-Integration to the current Information Age.

Reproductive Track deals with the issues associated with any reproductive (sexual) behaviors that promote physical and/or psychological violence or harm to include: Abortion and HIV/AIDS Transmission. Behavioral Development Track - Any behaviors that promote/ameliorate the development of at-risk behaviors associated with future BOBV that are environmentally-determined and associated with some form of learning to include: domestic violence exposure, intimate partner violence (IPV) exposure, covictimization, single-parent homes (SPH) and positive male role modeling/mentoring.

Any thoughts, feelings, ideas, memories, attitudes, beliefs, ideologies and/or values that promote, reinforce/maintain, or are the consequence of BOBV to include: Black Nihilism/Fatalism, adoption of the Code of the Streets, Criminal Mindedness, Dissociative processes and post-traumatic stress disorder (PTSD).

Media Track deals with any form of entertainment that is involved with the promotion, initiation, maintenance, reinforcement, and/or the consequence of BOBV to include: Gangsta Rap lyrics, videos/games and negative media stereotypes. 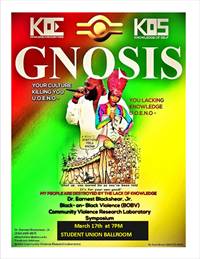