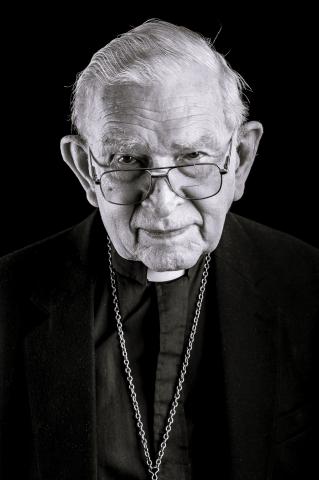 Civil rights activist, the Rev. Robert S. Graetz  (1928-2020)  died on Sunday, Sept. 21. at the age of 92.  His larger-than-life persona will be remembered by the Alabama State University family and the nation.

"Alabama State University mourns the passing of the icon of the Civil Rights Movement," said President Quinton T. Ross, Jr. "Rev. Graetz devoted his life in service to others and was a special member of the ASU family. He and his wife have been passionate frontline supporters for equality and social change over the course of their marriage of more than 70 years. Rev. Graetz will be remembered as a man of great courage, deep convictions and an exemplary love for humanity. His legacy will forever be a part of the history of this nation, as well as he history of Alabama State University."

Rev. Graetz life’s work focused on civil rights, reconciliation and a vision that he and his wife shared with Dr. Martin Luther King Jr. -- a vision of a “beloved community.”  He fought against systemic racism until his death.

Rev. Graetz’s notable works included his commitment to Alabama State University, his adopted alma mater.  Each year, he along with his wife, Jean (known as Jeannie), hosted a forum on race relations that bore their name at ASU’s National Center for the Study of Civil Rights and African American Culture.

In 2018, the couple donated a letter to ASU that was written by their friend and civil rights activist Rosa Parks. The letter, which was purchased at auction by the Graetz family, described the 1957 bombing of the Graetz's home. The Graetzes were Parks' neighbors at that time.

Gratez was born May 16, 1928, in Clarksburg, West Virginia. He graduated from Capital University in 1950. He received his B.D. from Evangelical Lutheran Theological Seminary just before he and his wife arrived in Montgomery in 1955 to become the white pastor of an all-black congregation, Trinity Lutheran Church. Soon after, they became friends with Parks and later was introduced to the Rev. Martin Luther King Jr.

Graetz got involved in the Montgomery Bus Boycott, a landmark event of the Civil Rights Movement, the same year he became pastor of the Lutheran Church.  His role in the boycott included driving African Americans to work or shopping for several hours each day. Graetz's support of the movement also included serving as secretary of the Montgomery Improvement Association, the organization founded to organize and support the boycott, and appearing at meetings led by King.

The Graetzes were among the few white supporters of the Montgomery Bus Boycott. Because of his involvement, he had sugar poured in his car’s gasoline tank, had his tires slashed, was arrested and ostracized by other whites, and he received many threatening phone calls.  Bombs were planted at his home on two occasions; the largest did not explode.

After the last bombing in 1957, Graetz left Montgomery with his wife and their seven children to become pastor of St. Philip Lutheran Church in Columbus, Ohio. He remained active in civil rights issues, operating a street ministry in Washington, D.C., in the late 1960s, and then advocating in support of gay rights.

In 2008, the Graetzes returned to Montgomery where they became actively involved in various civic activities including the diversity group One Montgomery, the League of Women Voters and Alabama State University events.

Graetz gave a first-person account of the Montgomery Bus Boycott in several books that he authored.