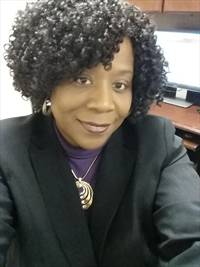 Andrea Mosley is the newly appointed director of the Small Business Development Center at Alabama State University. She has been with the SBDC since 2010. Under the guidance and mentorship of the late Mr. Lorenza Patrick, former director of the ASU SBSC, Mosley has moved through the ranks with the SBDC, serving as a temporary secretary, administrative secretary to business account executive/small business advisor, to her current position as director in 2016.  As a business advisor, Mosley have helped 14 entrepreneurs to start their businesses; conducted more than 300 of one-on-one-counseling sessions, assisted clients with obtaining more than $1 Million in capital investments; organized 30 successful business workshops with more than 578 participants; and interviewed and been featured on WAKA CBS TV News, WSFA NBC TV News, Montgomery Advertiser, WVAS Radio on several occasions to promote the ASU Small Business Development Center services and programs.

In her tenure at ASU, Mosley has also served as the Certifying Officer for the ASU Office of Veterans and Military Affairs. Prior to joining the SBDC, Mosley owned a small business, Prestige Consulting and Designs, which was an online virtual office assistance company that provided technical assistance for small nonprofits and individuals. Mosley holds a Bachelor of Science Degree in Human Resource Management from Troy State University and a Masters of Arts Degree in Human Services Counseling Business from Liberty University.

Mosley honorably served in the U.S. Marine Corps from 1989 to 1993 and is a Desert Shield and Desert Storm Veteran. She is active in the community serving as a roundtable facilitator for the Montgomery Chamber of Conference Women in Business Conversations, director for Camp KARATer, a project of Saved Kids of Incarcerated Parents (SKIP), Inc, and, Minister of Education/Adult Sunday School teacher at Mt. Olive Missionary Baptist Church (Mt. Meigs, AL).  She is a proud member of the IOTA Phi Lamba Sorority, Inc.  She has also served on the executive board of the Alabama PTA as State Vice President of Legislation and Advocacy/Federal Legislative Chair, a board member of the Alabama Poverty Project, and on the 2005 Montgomery Public Schools Facility Study Committee.

Mosley is a newlywed married to Perry Mosley and with this union is blessed to have a total of four wonderful children.

A write-up on Mrs Mosley that appeared on the Alabama Small Business Development Center Network can be viewed here.