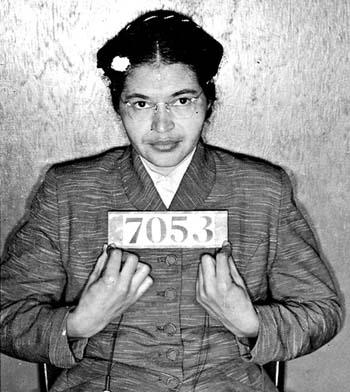 Rosa Parks stood up for freedom in 1955 (contributed).

Alabama State University's National Center for the Study of Civil Rights and African-American Culture (National Center) presents its Ralph D. Abernathy Civil Rights Lecture Series on Monday, Dec. 5, from 5:30 p.m. - 6:30 p.m. virtually on YouTube and on Facebook @ CivilRightsCenter.
The program honors America's modern Civil Rights Movement that had its seminal birth in Montgomery, Ala., when Rosa Parks stood up in peaceful protest against the Jim Crow segregation laws that required African-American citizens to move to the back of city buses to accommodate white passengers.
The National Center heralds the bravery of Parks who refused to give up her seat to a white passenger on December 5, 1955 and was arrested by the Montgomery Police Department for failing to do so. The incident served as a catalyst for the Montgomery Bus Boycott, the 382-day crusade against segregated bus service by the city's approximately 50,000 African-American citizens. The successful organized protest was the spark that ignited many other peaceful protests led by Dr. Martin Luther King, Jr. in the quest for freedom and equality for all of the citizens of the United States.
"The National Center is participating in the observance of the 67th Anniversary of the Montgomery Bus Boycott in honor of the late Rosa Parks and the late Rev. Dr. Calvin Butts, and we will stream the pre-recorded Montgomery Bus Boycott program that originated first in 2011 with Dr. Butts acting as the featured speaker from the pulpit of the First Baptist Church," said ASU Archivist and National Center representative, Dr. Howard Robinson.
"The program participants on Dec. 5 will virtually provide reflections on the life and legacy of Rev. Dr. Calvin Butts and on the historical significance of the Montgomery Bus Boycott and those who made it happen," Robinson added.
News media contact: Kenneth Mullinax, 334-229-4104.