BOT Elects Officers at May 5 Meeting 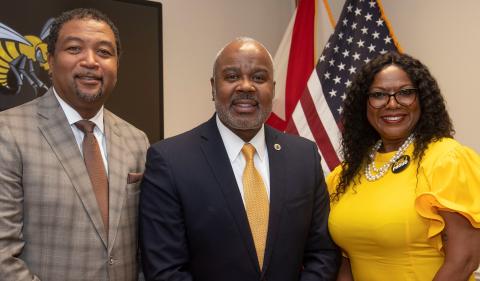 ASU's Board of Trustees Elects New Leadership at May 5 Meeting

During the Alabama State University Board of Trustees (BOT) meeting on May 5, significant actions took place that included the election of new leadership. Former president pro-tempore, Brenda Brown Dillard was elected to serve as Board president. She won without a dissenting vote.

The Board also elected Delbert B. Madison as its new president pro-tempore. The votes came as former president Darrell Hudson's two terms as head of the Board ended.

Dillard, who is one among five siblings to graduate from the University, is a program manager for Security Walls, LLC.

"Thanks to the Board of Trustees for its confidence in electing me as your new president. I do not take this position lightly. I love ASU and I will do everything in my power to help to take it to a higher level with the aid and assistance of my fellow team members on the Board," stated Dillard, a native of Browntown, which is located in Autauga County.

Madison, is a resident of Montgomery and serves as a senior vice president with ServisFirst Bank in its cash management department. While a student at the University, he was ASU's representative to the SWAC Athletic Conference for collegiate basketball.

"Thanks for electing me as your pro-tem and I will never forget that we are all a team," Madison said after his election. "ASU is my life and without the education that I received here, I wouldn't be where I am today, which is working for an incredible bank. As a member of ASU's Board, my number one goal is to be a servant leader for ASU, and my most important ambition is for us to help make our students thrive."

"I must first thank retiring Board President Darrell Hudson for his service to ASU. I truly appreciate him allowing us to work together in the almost five years that I have been here as the University's president," Ross stated. "I also wish to congratulate our newly elected Board of Trustees President and President Pro-tem, both of whom I know will always put the best interests of our students first and foremost in whatever they do in their new positions. I look forward to working with them and together we will keep student success in the forefront of whatever we accomplish," Ross said.

Outgoing BOT President Hudson was praised by ASU President Ross for his leadership and commitment to the University’s mission. He was given plaques by both Ross and his fellow Board members in recognition of his outstanding service to Alabama State University.