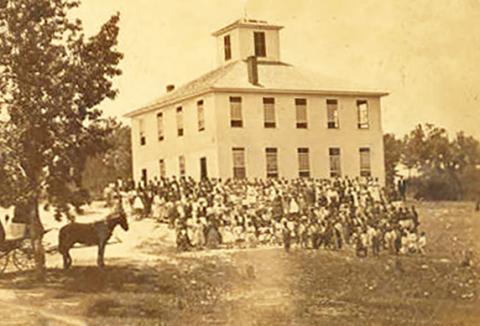 Historian, author and lecturer, Joseph D. Caver’s long-awaited book, titled "From Marion to Montgomery" will soon be published by New South Books. The book documents the origin and early history (1867-1925) of one of America's earliest and most prominent HBCUs, The Alabama State University.

Caver is an alumnus of ASU (class of 1974), a current history lecturer at the University and was the recipient of the 2010 Spirit of Marion Award from the University.

"I wrote this book on my alma mater, The Alabama State University, because it gives people an insight and understanding of its past, and the obstacles that its leaders, students, faculty and supporters have had to overcome to see it advance from a Normal School in 1867 to a post-secondary institution in 1925," Caver said. "The epilogue of my book that I am working on now will additionally cover ASU from 1925 to present day and its evolution into a college and then its transformation to the world-class university that it is today," Caver added.

Caver's 300-page book weaves the story of how the "Marion Nine" (nine freedmen/former slaves) in Marion, Ala., founded the Lincoln Normal School, with a mere $500. That “normal” school eventually moved to Montgomery and evolved as Alabama State University. Caver chronicles how the school’s early leaders, including a Scottish national named William Burns Paterson, the diligent scholar George Washington Card, and other visionaries all contributed to shaping the Normal School from its origin all the way to 1925 and its status as a post-secondary educational institution.

Caver’s historical account is very detailed in revealing the school’s turbulent history in Marion, the controversial 1887 move to Montgomery and stops in 1925 just before it evolves into the Alabama State Teacher's College.

"The history of ASU is important because it mirrors the history of African-Americans in this nation and our community's desire to obtain the American Dream, which is to get a good education, make a decent wage, become a full-fledged citizen and thus fulfill the dreams of the Marion Nine," Caver stated.

Caver's book "From Marion to Montgomery" will be released in August and will be available for purchase at bookstores or online.

For more information on it visit: http://www.newsouthbooks.com/frommariontomontgomery