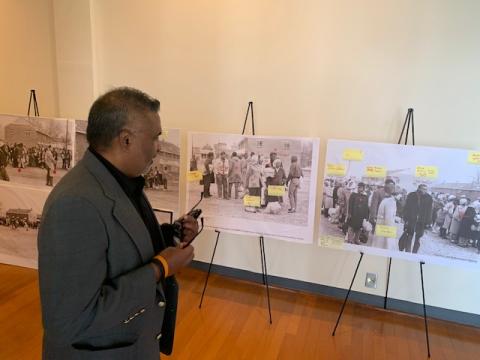 One of the most pivotal events of the modern Civil Rights Movement was “Bloody Sunday.” Now historians are trying to identify the people who marched into the pages of history.

A 30-piece photographic exhibit on display at Britt Galleries in the Tullibody Fine Arts Building at Alabama State University is part of an ongoing effort to identify the unknown foot soldiers of “Bloody Sunday.” The exhibit runs through August.

​On March 7, 1965, African Americans seeking voting rights marched through Selma, Ala., headed for the state capitol. Gov. George Wallace ordered state troopers to stop the march. Troopers used tear gas on the marchers and beat them with clubs and whips. The assault was  called “Bloody Sunday.”

About 50 people have already been identified, said ASU faculty member Dr. Robert White, who is spearheading the University exhibit.

“We hope people who visit the exhibit will recognize a face in one of the pictures. We’re just hoping to get some names with faces to identify the unknown heroes of the historic day,” White said.

Auburn University professors Richard Burt and Keith Hebert compiled the photographs and coordinated the efforts to identify the unknown foot soldiers. They worked with a group of honors college students to name people who were involved in the protest on March 7, 1965. Joining the Auburn team are Elijah Gaddis, an Auburn professor, as well as White and Veronica Pitts of Selma High School.  Dr. Cleve Webber is ASU’s facilitator of the art exhibition.

“One of the things we wanted to do is partner with schools in the Black Belt, so we contacted Veronica to serve as our facilitator in that area,” White said.

Burt and Hebert created a Facebook page, titled “Help us identify the Selma Bloody Sunday Foot Soldiers,” where people can identify photos of the foot soldiers in the black-and-white images.

White, who teaches African American Humanities at ASU, noted that the exhibit highlights the need for additional historical research and documentation for one of the most famous moments in history.

“This project is critical to us in gaining qualitative and quantitative information about our cultural history….It is interesting how the event known as ‘Bloody Sunday’ garners so much attention from different aspects of the academic world,” White said, who is responsible for bringing the exhibit to ASU.

“I wanted my students to see the exhibit and get a visual representation of an event that we talk about in my class. It’s been kind of growing phenomenally.”

The exhibit has already traveled to Selma and will travel to Marion, Alabama once it leaves ASU.

“We plan to take it to Marion because most of the people in the photos come from there,” White said.  “This is a once-in-a-lifetime opportunity. The foot soldiers that have come and we have interviewed were able to identify themselves and their loved ones.  They were taken aback about what they saw. The different experiences ranged from tears to closer to a desire to want to increase the visibility of the foot soldiers and to emphasize the importance of those people who sacrificed as much as other people did but have not gotten the recognition or the opportunity to express themselves and tell their side of the story.”

White encourages the public, especially grade school and college students, to come and witness these extraordinary photos to study and absorb the Civil Rights Movement.

For more information about the ASU exhibit, please email rwhite@alasu.edu or call 334-202-6991.