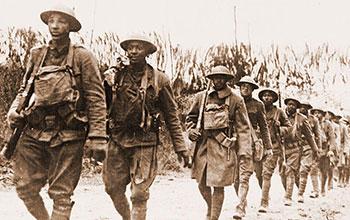 Marking the 100 Year Victory Commemoration of World War I.- The entire nation is ringing bells at this same time on Sunday to mark the centennial of the end of The Great War -

WHERE: ASU's Library (The Levi Watkins Learning Center) just off N. University Drive, across from the President's Home.

ASU Will Participate in Bells of Peace Ringing Ceremony
Join us at Alabama State University on Sunday (Nov. 11) at exactly 11 a.m. in front of the ASU Library (Levi Watkins Learning Center), as the University participates in a nationwide bell-ringing ceremony, which commemorates the 100th anniversary of the end of World War I - to the very minute! Bells across the entire nation will be ringing at
11 a.m. in each of the respective time zones to commemorate this centennial commemoration.

Also known by historians as The Great War, World War I officially ended on Nov.11, 1918, on the eleventh month, of the eleventh day, at its eleventh hour.

ASU officials and students will be present and will have a brief ceremony after which the University's Historic Marion Bell will toll 100 times for each year since the end of that most catastrophic war.

"This is being done at Alabama State University to show solidarity with the rest of the nation in commemorating the end of The Great War, and in prayerful hope for a perpetual world-lasting peace," said ASU officials.


ABOUT THE BELLS OF PEACE RINGING CEREMONY
In 1918, on the 11th day, in the 11th month, and at the 11th hour, the U. S and its Allies, and Germany and the Central Powers agreed to a cease-fire that would mark the end of World War I.

On Sunday (Nov. 11) at The National Cathedral in Washington, D.C. and across the nation (including at ASU in Montgomery) bell-ringing ceremonies will be held at 11 a.m. local time to commemorate the centennial of the War's end. Local churches, schools, courthouses, and other entities are invited to participate at the time of this nationwide occasion within each respected time zone at 11 a.m.