Bama State Collegians Honored with an ‘Evening of Swing' 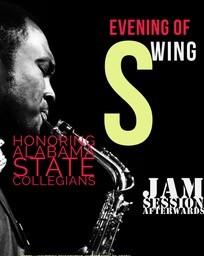 The Bama State Collegians are back in the limelight. Noted trumpeter Tommy Stewart is paying tribute to the Big Band orchestrate he once directed with an “Evening of Swing” with the Tommy Stewart Orchestra at 3 p.m. on Sunday, Aug.  8, at Mountain Top Coliseum (3521 Ratliff Road) in Irondale, Alabama.

“We are honoring the Bama State Collegians to remind those who didn’t realize how they impacted the music industry and Alabama State University,”  Stewart noted.  “I love Alabama State as much as I love myself and I wanted to highlight this great institution.”

The event features a jam session with trombonist and ASU alumnus  Fred Wesley, who played with James Brown and Parliament/Funkadelic.

The “Evening of Swing” also will honor the renowned trumpeter and  former director of the Bama State Collegians, Erskine Hawkins, dubbed “The 20th Century Gabriel.”

In 2011, the story of Hawkins and his start in the Bama State Collegians was the subject of a Florida State  University Film School  MFA Thesis Film “The Collegians,” written and directed by Alabama  State University alumnus Bryan Lewis.  Hawkins died in 1993.

“Erskine Hawkins made Bama State Collegians popular all over the world. He cut three songs that put them on the map – ‘After Hours,’ ‘Tippin’ In’ and ‘Tuxedo Junction,’ which he is best remembered for. His music helped to define the Swing Era.”

The masterful players and singers of the Tommy Stewart Orchestra will perform those best-known pieces on Sunday.

The event also includes a Concert Symposium,  “The Impact of  ‘Fess’ Whatley on HBCUs and Big Bands Concert,”  starting at 8 a.m. on Saturday, Aug. 7.

When Stewart landed at Alabama State College at the age of 17 in 1957, he said he didn’t know how he was going to pay his tuition. He said joining the Bama State Collegians, a student-jazz orchestra that was formed in 1929, gave him a lifeline.

“The band made enough money to pay for my four years of college,” said Stewart, who eventually became the band’s leader.  “My scholarship also helped. I was a member from 1957 to 1961.”

The Bama State Collegians have been directed by a number of notable musicians, including Stewart and Hawkins.

Stewart noted that during the Depression in the mid-30s when the college experienced severe financial problems,  the Bama State Collegians helped to generate enough funds to help save the institution from closing permanently.

“The college would have closed if it wasn’t for the Bama State Collegians. The state of Alabama at the time refused to provide any financial support to cover teacher’s salaries and other pertinent expenditures and said the University had to close. So, the band played concerts, dances and other events. Each week after living and traveling expenses were deducted, the remainder of the money earned was forwarded to Dr. Trenholm to help pay bills, salaries and whatever else that was necessary to keep Alabama State College open,” he said.  "I think we should continue to honor this band that did so much for the University."

Stewart said the orchestra also holds an important place in jazz history. In 1934, the entire group traveled to New York and became the Erskine Hawkins Orchestra, recording hit records such as “Tuxedo Junction,” which rose to No. 7 nationally by Hawkins and No. 1 by Glenn Miller.

As a Trumpeter, pianist, arranger and composer, Stewart has had a successful career that spans more than 40 years.

Stewart is the co-founder of the African-American Philharmonic Orchestra and was inducted into the Alabama Jazz Hall of Fame in 1988. He has recorded many times as a bandleader, including Tommy Stewart and His Orchestra, on Jazzology Records.

At 81, he stays busy playing jazz trumpet, helping develop R&B acts and taking his band on the road. In his spare time, he hopes to add the title of author to his long list of accomplishments.
“I’m also writing a book titled ‘Bama State  Collegians: 1929-1950s,’” he said. “I hope people will read it and learn more about this world-class institution.”