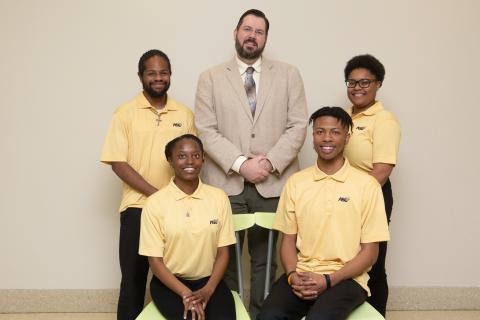 Four Alabama State University students are preparing to match their intellects and go head-to-head with other colleges to win the 30th annual Honda Campus All-Star Challenge (HCASC) on April 13-17 in Torrance, Calif.

Representing ASU at the Honda nationals are Endia Harris, a junior majoring in political science from Calera, Ala.; Elijah Nathaniel Stewart, a math  and secondary education major from San Francisco, Calif.;  Everett Jamal Sims,  a junior majoring in social studies education from LaFayette, Ala.; and MiKayla Carter, a  business marketing junior from Leesville, La. ASU's Dr. Mark Hill will coach the team.

After winning a series of regional competitions, ASU is one of 48 schools that will vie for the HCASC championship, which is America’s premier academic competition for Historically Black Colleges and Universities (HBCU's).

ASU has the opportunity to win the HCASC top prize – a $75,000 institutional grant from Honda.

Honda Campus All-Star Challenge connects the nation's best and brightest HBCU students who expand their scope of knowledge, learn teamwork and sportsmanship, and develop a bond with their fellow competitors.

“For 30 years, Honda Campus All-Star Challenge has provided a platform for the nation’s top HBCU students to advance their dreams,” said Steve Morikawa, vice president of Corporate Relations and Social Responsibility at American Honda. “Honda congratulates the ‘Great 48’ for their incredible work ethic, teamwork and competitive spirit. We look forward to an exciting National Championship Tournament and crowning the 2019 HCASC National Champion in April.”

The 2019 Honda Campus All-Star Challenge finals will be live-streamed on Tuesday, April 16,  starting at 12:00 p.m. ET. To view the live stream and to get for more information about HCASC, including a full list of the 48 qualifying teams, visit HCASC.com.

Honda and the HBCU Community

In 1989, Honda established HCASC as a way to recognize and celebrate the academic achievements of HBCU students. More than $9 million in grants from Honda to participating HBCUs have been used to fund tuition and book scholarships, student development initiatives, endowment and development campaigns, as well as facilities and equipment.

Honda has been committed to supporting the success and dreams of the nation's HBCU's. Through initiatives like the Honda Battle of the Bands and Honda Campus All-Star Challenge, Honda has been able to reach more than 170,000 students and award over $12 million in grants in support of HBCU education programs.