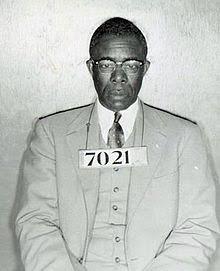 Join us on Wednesday (Nov. 13) as Alabama State University's National Center for the Study of Civil Rights and African-American Culture hosts its E. D. Nixon Research and Cultural Enrichment Series and Brown Bag Luncheon from Noon - 1 p.m. It will take place at the National Center, which is located at 1345 Carter Hill Rd.

The series presents a wide-ranging series of topics dealing with individuals, events, or periods in Montgomery’s African-American history which it believes has not received the full scrutiny or attention deserved by historians or researchers.

The theme for Wednesday's E. D. Nixon Research and Cultural Enrichment Series is “The Truth Unveiled: African-Americans’ Fight for Legal Rights in Montgomery, Alabama in the Twentieth Century.” At the event, Dr.  Howard Robinson, ASU archivist and assistant professor of History, will serve as guest lecturer and will discuss this event's featured unsung legal activist’s Charles Conley and his efforts in African-Americans’ struggle for constitutional rights in Montgomery during the Twentieth Century.