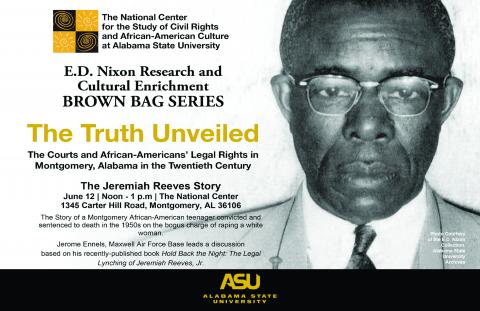 The National Center for the Study of Civil Rights and African-American Culture at Alabama State University will host the first E. D. Nixon Research and Cultural Enrichment Series/Brown Bag Series titled, “The Truth Unveiled: The Jeremiah Reeves Story.” The program will be held on Wednesday, June 12 from noon to 1 p.m., at The National Center, 1345 Carter Hill Rd.  This year’s topic is “The Truth Unveiled: African-Americans’ Fight for Legal Rights in Montgomery, Alabama in the Twentieth Century.”

Mr. Jerome Ennels, author of Hold Back the Night: The Legal Lynching of Jeremiah Reeves, will serve as guest lecturer and will discuss the case of Jeremiah Reeves, a Montgomery Black teenager tried, convicted, and sentenced to death on the unsubstantiated charge of the rape of a white woman.

Hold Back the Night is a chilling, shocking account of how a black high school student was falsely arrested, tortured and forced to confess to sexually assaulting several white women, and tragically executed for a rape that the facts and evidence strongly suggests never took place. Though Reeves’ saga is undoubtedly one of the most important episodes in the history of the American Civil Rights Movement, very little has ever been written about this case which played a critical role in the birth of the Montgomery Bus Boycott, helped fuel the nation’s burgeoning voting-rights crusade, and blatantly exposed the injustice and inequality of the southern judicial system. This book corrects these historical oversights, fills a critical void in the annals of the American Civil Rights Movement, and provides for the first time a detailed account of a young black man’s desperate but futile fight for justice.

The National Center will host several upcoming “The Truth Unveiled” lectures including:

·  the Arthur Madison case, (the Montgomery-born-transplanted New York lawyer disbarred by the state for challenging the literacy test), on September 18, 2019 from 12 - 1 p.m.; and

For more information, contact the National Center for the Study of Civil Rights and African-American Culture at Alabama State University at 334-229-6888.