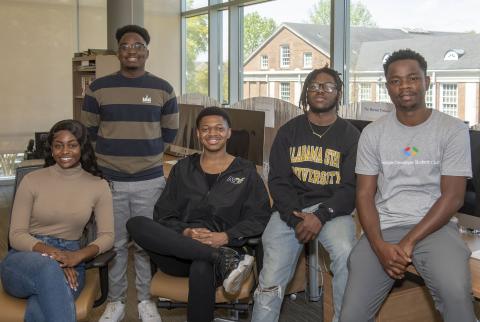 Each award given to the four student journalists was based on the content published from November 2020 through November 2021. The University also earned an award for the Hornet Tribune, the student-run newspaper.

The Hornet Tribune is composed of student journalists from all majors who have a desire to submit various forms of media to be shared with the ASU community.

Stewart said preparation helped him capture first place.  “I’ve been preparing for this my whole life,” said the sophomore communication major from Birmingham, Alabama. “I  hope my future holds many more awards. I expect to keep pushing forward to eventually have a career as a TV sports reporter. This competition and The Hornet Tribune have raised my bar to be a better writer.”

Zanders, a sophomore finance major from Tallahassee, Florida, was “shocked” when she heard the news she won. “I’m in COBA (College of Business Administration) and I don’t consider myself to be a communications connoisseur if you will.  So, I was very happy that I placed.”

Student designer Oloko, a senior in graphic design from Lagos, Nigeria, said he didn’t know if he would win but was elated when he did. “When I received the email confirming my win, I wasn’t expecting it; but I knew I put in a lot of time working on my designs, so I was happy my work was recognized.”

As for Martin, a freshman art major from Montgomery, Alabama, who started drawing at an early age, winning first place in the SEJC competition was unexpected.  “I was surprised but not so surprised because I have won awards before,” Martin said, who is now working on a graphic novel. “But I’m extremely happy I managed to get first place in a regional competition. I really appreciate SEJC highlighting my talent...It’s been a great experience.”

All the winners expressed appreciation to The Hornet Tribune for helping them find their voice, providing real-world experience and giving them the tools to succeed.

“Working here has allowed me to meet great, amazing people from Alabama State and the community to the point where I know whatever I do I will have a support system. I know working at the Hornet Tribune will help me reach my goals,” said Zanders.

Stewart echoed Zanders. “The newspaper has put me in a great position to succeed.”

“I am super proud of Khalil, Camille, Lateef and Ronald for always putting 110% into their work ethic, and it truly paid off. I know this is only the beginning because The Hornet Tribune team will keep on striving and keep on winning awards.  I hope to keep leading the team toward success,” said the graduating senior majoring in communications.

Kenneth A. Dean, director of Student Media/Division of Student Affairs, attributes the news team’s success to leadership and the journalistic training at ASU.

“Micah Sanders is a great leader. I grabbed him when he was a junior and he started out as an art and entertainment writer… he moved up to editor-in-chief this year. He is phenomenal.  He knows how to bring out the best in our writers. He has given his all to ensure that The Hornet Tribune is an award-winning, student-led newspaper. I also think ….our students get the training that they need to go out into the world and be successful.  I think SEJC is proof of that,” Dean said.

The journalist students were among college journalists representing 29 colleges and universities in the Southeast, including Alabama, Arkansas, Florida, Georgia, Louisiana, Mississippi and Tennessee.

Zanders encourages ASU students who would like to become “a watchdog for the public” to join The Hornet Tribune.

“I’d like Alabama State students to check out The Hornet Tribune …. and consider joining the staff. This is a great family and there is room for everyone.  Even if you choose not to work in the news industry, the student newspaper will teach you critical thinking, team-building skills, and many more skills that will serve you in any facet of your life,” Zanders noted.

The Hornet Tribune, Sanders added, “allows you to be your best self.”

The Southeast Journalism Conference is a vibrant learning community of collegiate journalists in a variety of media disciplines honing their craft through professional development and the Best of the South Collegiate Journalism Competition.

SEJC was created to encourage greater interest in student journalism and to form closer ties among journalism schools in the Southeast United States.