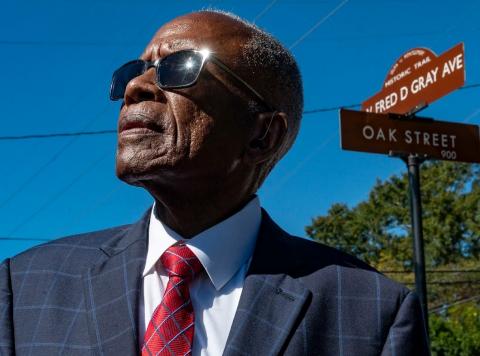 Pictured is Fred D. Gray, Sr. in front of the street sign that bears his name (photo credit: David Campbell/ASU).

- Gray (ASU Class of 1951) Gained Prominence Representing Rosa Parks, Dr. King and Many Others in Striking Down Segregation.

By Kenneth Mullinax/ASU.
In a history-making ceremony held on Oct. 26 in the Montgomery neighborhood of his youth, acclaimed attorney and ASU alumnus, Fred D. Gray, Sr. (’51), made history once again. The former W. Jeff Davis Avenue - the street where Gray’s childhood home is located - was renamed “Fred D. Gray, Avenue." For decades, the street had carried the name of a man who promoted slavery and disunion, while its new name honors a man who is a champion of freedom and equality.

The renaming is part of an initiative led by Montgomery Mayor Steven L. Reed who empaneled a committee to study the streets of the capitol city and recommend “persons whose character and whose lives deserved commemoration.” Retired U.S. Magistrate Judge Vanzetta Penn McPherson, who served as the moderator of the ceremony, was a member of that committee.

“We established, of course, a set of criteria. We decided that a street, or a site, which could be a building or a park or another physical location, should be named to honor the person’s life…to restate public approval of the person’s demonstrable values and exemplary behavior, to inspire others to embrace those values and mirror that behavior and to create a historical record of public approval of the person’s achievements. At the very top of our list…was Fred D. Gray,” McPherson said.

“I am honored to stand before you today as we celebrate the life and legacy of one of this nation’s most impactful attorneys and civil rights champions, Mr. Fred David Gray, Sr.,” Ross said.

President Ross was joined on the stage in a place of honor that he shared with Gray and his wife, Carol; Montgomery Mayor Steven L. Reed, Congregational Church of Christ Minister Ray Speller and Randall Williams of New South Books, publisher of Gray’s books and a friend.

In his remarks, Dr. Ross explained that every day as he carries out his duties as the University’s 15th President, he is reminded that he stands on the shoulders of great men and women, such as Gray.

“Mr. Gray, your life is a shining example to all of us of what is possible when you pursue a purpose-driven destiny with passion, courage and integrity," Ross said.

ASU’s President shared the story of how the influence of an educator at the University caused Gray to change his career path and become an attorney.

“Dr. J.E. Pierce taught political science at ASU and…had a tremendous impact on Mr. Gray and actually became the catalyst for him to change his career plans and attend law school — a decision that literally helped to change the course of civil rights in this country,” Ross shared.

The audience included ASU Board of Trustee (BOT) member Judge Tiffany McCord, former BOT chair and County Commission Chairman Elton Dean, Sr., and a swarm of other Hornet alumni, faculty, students and staff to honor the man of the hour.

Before the formal unveiling of the new street sign that now bears his name, Fred Gray took a moment to reminisce.

“This means a great deal to me because I was born around the corner at 135 Hercules Street and then we moved to West Jeff Davis Avenue where I attended elementary school and later walked back and forth to college at Alabama State,” said Gray.

“I would like to say something today to the students at ASU and to all students, which is that the struggle for equal justice has not ended --- racism and inequality are still present and I hope that they will decide to participate today in eradicating these evils,” Gray commented.

Members of the Mighty Marching Hornets Band performed several numbers at the event including the National Anthem; under the direction of band director, Dr. James Oliver. He was joined by Dr. Kristofer Sanchack, director of the Alabama State University Concert Choir, which delivered a rousing rendition of “Lift Every Voice and Sing.”

“The choir is humbled to have been invited to perform at such a historically significant event as the celebration of Fred Gray’s numerous nationally acclaimed accomplishments in his ongoing legal battle for equality for all people,” Sanchack stated.

Members of the ASU Choir expressed their awe at being included in the event’s program.

“Performing here is something that I will never forget for all of my life,” said ASU junior Deja Sampson, a choir member from Stafford Va.

“I just love being a part of this historic event to honor such a giving person as Mr. Gray,” stated Nike Diges, sophomore from Washington, D.C.

ASU PRESIDENT PUTS IT IN PERSPECTIVE

“We cannot rest on his laurels. If we want to truly honor Fred D. Gray, Sr. then we must all continue to destroy any threat to human rights by those means that are at our disposal.” Ross explained. “So, on behalf of the Board of Trustees, the faculty, staff, students and alumni of The Alabama State University, know that your alma mater is very proud of you, Mr. Gray. Thank you for your service and your impact on this nation and the world."
News media contact: Kenneth Mullinax, 334-229-4104.