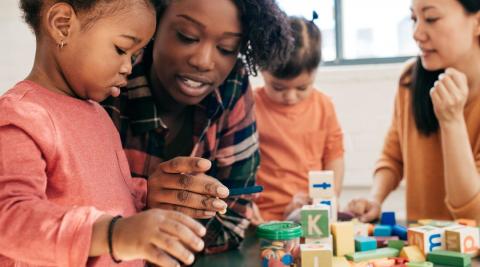 - This story was written by Kenneth Mullinax/ASU.

Alabama State University’s acclaimed Zelia Stephens Early Childhood Learning Center is among the inaugural group of schools receiving one of the first round of nationally-recognized quality Alabama First Class Pre-K New Classroom Grants, which are awarded by Governor Kay Ivey and the Alabama Department of Early Childhood Education.

ASU’s grant is due to the Alabama Legislature approving Governor Ivey’s budget recommendation for an increase for the Alabama Department of Early Childhood Education - the biggest ever individual yearly expansion of Alabama’s First Class Pre-K program.

“At ASU, we are extremely thrilled to be awarded this state grant to the University’s Zelia Stephens Early Childhood Learning Center because we want to insure that all children in the Montgomery community have an opportunity to receive a first-class  education,” said Dr. Tanjula Petty, interim assistant provost for ASU's Academic Affairs. “As a University that is steeped in a rich tradition of training educators and teachers, we are well aware that a  good pre-k educational foundation is important in engaging children early in literacy to improve reading and writing skills, fostering early math and creative arts skills, as well as the technological skills needed so they will go forward and have the tools necessary to have a good education,” Petty added.

ASU’s grant is part of the State creating 164 new classrooms in 38 Alabama counties this fall according to a statement released by the Governor’s Office. It said that additional grants will be awarded based on further evaluation of high-needs areas before the commencement of the 2019-2020 school year.

“Alabama’s First Class Pre-K program is truly the model of the nation,” Governor Ivey said in a news release announcing the grants.

As part of her plan that includes ASU’s early childhood center, this grant will expand access to new classrooms in Alabama’s state funded, voluntary pre-kindergarten program, which will help the state move closer to Alabama’s goal of serving up to 70 percent of eligible four-year-olds.

ASU'S PRESIDENT SAYS IT'S ALL ABOUT THE STUDENTS

ASU’s President, Dr. Quinton T. Ross, Jr., said that the University’s grant will help make sure that an increased number of Montgomery’s youngest assets, its children, gets a strong boast to their educational foundation.

“The new grant  funding  for  ASU’s Zelia Stephen’s school will allow us to make a difference in the lives of even more students and provide a great learning environment for the campus and the community,” Ross stated.