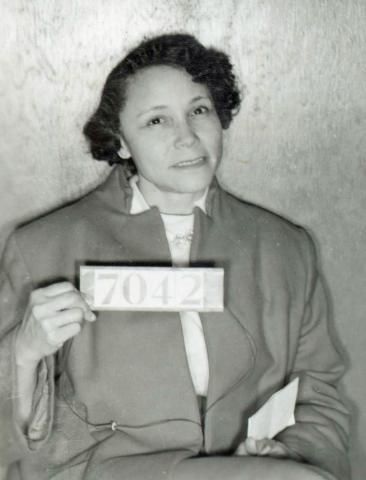 Police mugshot circa 1955 of ASU's Jo Ann Robinson, a leader of the Women's Political Council.

Join us at Alabama State University on Feb. 19, and learn more about “The Women’s Political Council" (WPC) and the development of a new generation of Montgomery's African-American leaders via its 'Youth City Initiative.'  It takes place from Noon - 1 p.m. at ASU's Levi Watkins Learning Center, which is the ASU Library.

It is all part of the E. D. Nixon Research and Cultural Enrichment Series/Brown Bag Luncheon program, which is sponsored by Alabama State University's National Center for the Study of Civil Rights and African-American Culture, which is under the leadership of Dean Janice Franklin.

Speaking at the event will be  Dr.  Howard Robinson, ASU's archivist and an assistant professor of History. He will serve as a guest lecturer and will provide an analysis of the ASU-based WPC’s programs that promoted many things, which included civic responsibility among Montgomery’s African-American youth in the 1950s.

It is free and open to the public.

ABOUT THE E.D. NIXON SERIES
ASU's E. D. Nixon Research and Cultural Enrichment/Brown Bag events presents a wide-ranging series of topics dealing with individuals, events, or periods in Montgomery’s African-American history, which are under reported by researchers and the news media. The theme for the E. D. Nixon Research and Cultural Enrichment Series for 2020 is “Connecting the Past and the Present: Significant Anniversary Dates in African-American History in Montgomery, Alabama (1945- 2020).”

Part I of the series is the Feb. 19, event above and it continues with the events listed below.

Part IV 'They Took Their Stand: The Browder v. Gayle Plaintiffs' on November 11.