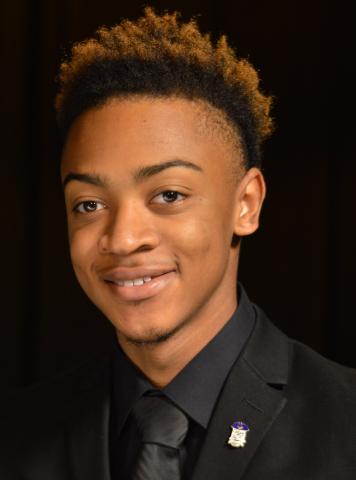 - Only student in Alabama to be named as a Disney UNCF scholar/among only 21 selected nationwide.

An Alabama State University student believes his “dream has come true” after learning that he has been selected as a 2022 Walt Disney UNCF Corporate Scholar. The award is in conjunction with both the Disney Company and the United Negro College Fund (UNCF).

ASU student, Montaz Dennis, has won a $5,000 annual scholarship and a prestigious paid (in-person) summer internship at The Walt Disney Company's headquarters in Los Angeles, Calif. Dennis is one of only 21 full-time students attending four-year institutions across the country to win this accolade.

Dennis is also the only student in Alabama to be named as a Disney UNCF scholar.

"This is just beyond wonderful for me - it's a dream come true - and I am still just wondering if it has really happened since it is so fabulous," said Dennis, a rising senior majoring in Radio-Television Communications. "The Disney officials just contacted me and said that I will be working for them starting in a few weeks with it lasting all summer long in its L.A. headquarters. They knew of my interest in sports and have assigned me to work with its ESPN division as a production assistant," said the Suitland, (Prince George's County) Maryland, native.

Disney officials stated that Dennis and his fellow scholars will also receive, in conjunction with the UNCF, mentorship opportunities and assistance securing possible full-time roles with Disney upon graduation.

According to Disney executives, ASU's Dennis and the other members of the 2022 Disney UNCF Corporate Scholar's cohort will join a growing number of students supported by the program, which is designed to nurture rising African-American talent pursuing degrees in finance, human resources, legal, production/media and technology.

“Disney’s longstanding relationship with UNCF, including our collaboration on this scholarship program, is an important part of our efforts to reimagine tomorrow by amplifying underrepresented voices and untold stories,” said Latondra Newton, Disney's senior vice president and chief diversity officer. “For more than 75 years, UNCF has helped generations of students claim a brighter future. Together, we’re carrying on this proud legacy, ensuring promising students are supported in their education and connected with Disney mentors and career opportunities.”

The students will be mentored by Disney employees as part of Disney on the Yard, an initiative established in 2020 to deepen the company’s existing engagement with HBCUs and their students. The initiative also has helped build a robust, long-term pipeline of African-American talent through the development of student internships, mentorship opportunities, internal HBCU cultural series, virtual career showcases for students, and much more.

ASU REACTION TO THE AWARD

ASU's vice president for Student Affairs and Enrollment Management, Dr. Derrick Brewster, believes that this award is evidence of both Disney's spirit of care and concern for minority students, as well as ASU's focus on academic and student development.

"This is evidence of the spirit of academic achievement and personal growth that we work hard to instill in all of our ASU students who have the where-with-all to reach out, work hard and make it happen," Brewster said. "We are proud of our student, Mr. Dennis, and thankful to Disney and the United Negro College Fund for having the foresight, imagination and good will to allow all students to 'wish upon a star' and discover that the Walt Disney Company can make their dreams a reality."