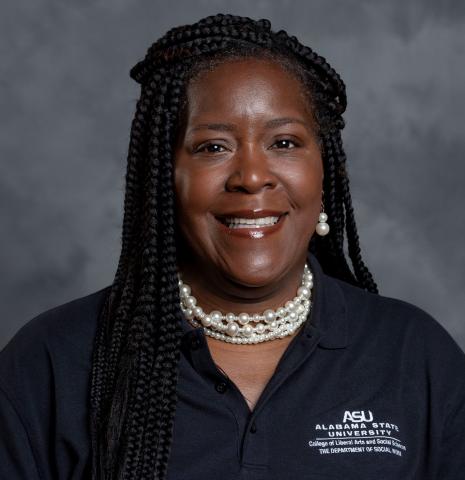 The interim-chair of Alabama State University's Department of Social Work has been named by the Women’s Foundation of Alabama (WFA) to its third ever class of Fellows for the Women’s Policy Institute (WPI). The fellowship is a permanent part of its overall advocacy, focused on public policy solutions to advance and accelerate economic opportunity for women in Alabama.

ASU's Dr. Denise Davis-Maye is among the WPI's 2022 class of Fellows and was among fewer than 30 women recognized statewide for their dedicated work and investment in equity for women, shared Melanie Bridgeforth, president and CEO of the Women’s Foundation of Alabama.

Davis-Maye stated that being appointed as a Fellow gives her a dual opportunity.

"First, this allows me to be on the front lines of identifying and highlighting the issues women face that could be ameliorated through policy development and legislative response," said Davis-Maye. "Secondly, and probably as important, I get to engage with like-minded women who are in the trenches of creating change for the most marginalized and oppressed women."

The WFA's Bridgeforth believes that following in the footsteps of the two previous classes, the 2022 class of fellows, hailing from 15 counties across Alabama, will receive more than forty-hours of experiential learning from experts across the state on such issues as civic engagement, issue campaigns, messaging, coalition building and race and gender equity.

“Lived experience is expertise. Those closest to the problem are indeed closest to the solution. No one is better equipped to address the issues that most hinder women than women themselves,” said Bridgeforth. “The Women’s Policy Institute elevates and connects the power of women from across the state by equipping these leaders with the specialized tools and resources needed to develop policy solutions to the most pressing economic and human issues."

"One of my major concerns is for dismantling the barriers which contribute to economic inequality and insecurity among black women and girls and includes the intersections of the racial and gender wage gaps and the intergenerational transmission of wealth," Davis-Maye said. "Next is my concern for the ways in which black women are still underrepresented at the Department of State and the U.S. Agency for International Development, especially in the higher ranks...probably most importantly, are the reproductive health issues of black women. Every year in the United States, hundreds of women die of complications related to pregnancy and childbirth, and women of color are disproportionately affected. For example, black women are more than three times as likely to die from childbirth as white women. Also black women are twice as likely as white women to suffer from infertility, but only seek help for it at about half the rate of their white counterparts."

Davis-Maye explains that the study of public policy social work at ASU is an area that prepares individuals to engage in macro-work, which allows large-scale social change to take place.

"If nothing else, my selection as a Fellow should remind our Hornet social workers that we can continue to effect the change we wish to see by influencing the way we do this work at the legislative and policy levels," Davis-Maye concluded.

ABOUT THE WFA
The Women’s Foundation of Alabama is a community-driven foundation impacting the world around it by accelerating economic opportunity for women. It envisions a society where power and possibility are not limited by gender, race, or place. Founded as a regional women’s fund in 1996, the WFA is the state’s only public women’s foundation applying a gender-lens to grant making, research, and advocacy. Learn more at www.wfalabama.org