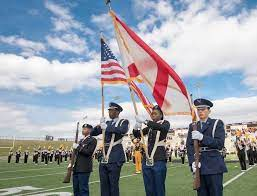 - Detachment-019 is Montgomery's first and only college Air Force ROTC program founded in 1971 and headquartered at ASU.

Alumnus William Chaney is a part of Alabama State University history. Chaney was one of the first ASU students to receive his commission as an officer in the United States Air Force through Detachment 019, the Air Force Reserve Officer Training Corps (ROTC) program headquartered on campus.

Chaney (ASU ’74) is a native of Faunsdale, Ala., who now resides in Cocoa, Fla. He says he is excited to return to his alma mater to join in the festivities.

"This 50th anniversary of Alabama State's Detachment-019 means a lot to me and to the many other graduates of the program. I say that, not only because I graduated in its first class ever of commissioned officers, but because I am proud that for 50 years, Montgomery's ROTC program has been headquartered on our ASU campus --- that makes all of this even more special to me," Chaney said.

It was a big deal in 1971 when Alabama State University was selected as the site of Montgomery's first-ever Air Force ROTC program. 50 years later, Detachment 019 is still the only Air Force unit on a Montgomery campus, having prepared hundreds of students/cadets to become officers upon graduation. In celebration of this momentous anniversary and the laudable accomplishments of “Det 019,” the attachment’s alumni have joined ranks with ASU President, Dr. Quinton T. Ross, Jr., and the leadership at Maxwell Air Force base to celebrate this auspicious occasion in style.

As a member of the executive board of the Detachment's alumni association, noted ASU alumnus Howard Watkins (ASU ‘80) explained that a number of events have been planned to commemorate the golden anniversary that will be hosted by 019 alumni, the Hornet Nation family and the public. The celebration will be held Nov. 18 through Nov. 20 and includes a number of ticketed events planned with the common goal of bringing together the assembled 019 alumni who are traveling from across the nation back to Montgomery, as well as honoring the University and its longstanding service training Air Force ROTC cadets to become officers.

"Everyone is coming together in a big way to honor our ROTC alumni in a style befitting this important event," said Watkins, a longtime resident of the Washington, D.C. area who has recently moved to Atlanta. "(Detachment) 019 is special because it united students starting in 1971 who were interested in being a part of the Air Force ROTC program while undergraduates in college from many different campuses such as Faulkner, Huntingdon, AUM and Troy also came to ASU for its ROTC program."

Watkins spent 17 years in the Air Force before taking early retirement as a major and going into business.

Both Watkins and Chaney are thankful for the preparation they received during their time as Detachment 019 cadets.

"It was the best thing that ever happened to me and to many other men and women who attended school here in Montgomery,” Chaney said.

Activities include a cake-cutting party hosted by a general at Maxwell AFB and a gala at the Renaissance Hotel and Convention Center. ASU will host Detachment 019 alumni at the ASU vs Texas Southern Military Appreciation Football Game at the ASU Stadium on November 20. The game will feature a flyover by the Alabama Air National Guard during the pregame show. ASU's renowned Mighty Marching Hornets Band will contribute to the festive atmosphere by doing a special recognition of Detachment-019 during the half-time show with anniversary recognitions going on throughout Saturday's football game.

For more information on Detachment 019's alumni association and to make a donation to its scholarship fund that benefits undergraduate students, click: https://www.det19aa.org/.