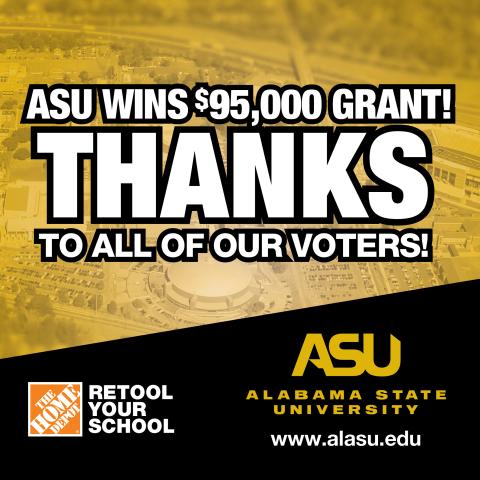 Alabama State University was a big winner in the 2022 Retool Your School Campaign sponsored by Home Depot. ASU won a total of $95,000 in grants to fund a campus improvement project that will benefit students. The University won $50,000 in its voting cluster and another $45,000 for having the Campaign of the Year out all of the entrants.

The grants were announced during a ceremony in Atlanta on Tuesday, April 26. The event was hosted by actor Laz Alonso a graduate of Howard University, and featured guest speaker Terrence J, a popular actor and alumnus of North Carolina A&T. ASU alumna DJ Stormy supplied the special music for the ceremony and “after party.”

Home Depot launched the Retool Your School campaign in 2009 as a means of supporting the nation’s HBCUs. Fifty-nine HBCUs participated in this year’s competition.

“We are so excited about these grants, especially the additional $45,000 for the Campaign of the Year Award,” said Jennifer Anderson, Executive Director of Institutional Initiatives. “Thanks to Hornet Nation, we were able to record enough votes to be one of the top winners in our cluster. And the campaign video that was created by our Division of Marketing and Strategic Communications helped us to bring home the additional grant award. These grants show that when the Hornets ‘Swarm as One,’ we can accomplish great things. And of course we are grateful to Home Depot for the awards and their efforts to make a difference on HBCU campuses.”

Home Depot has awarded more than $5 million in grants to HBCUs over the past 13 years.