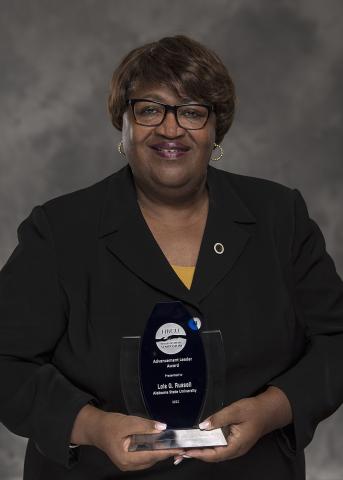 Alabama State University's vice president for the division of Marketing and Strategic Communications - Lois Russell - brought home a top award and accolades from the 2022 HBCU Philanthropy Symposium, which she recently attended in our nation's capital. The Advancement Leadership Award was presented to Russell during the Symposium which drew hundreds of Advancement and other higher education professionals for the three-day event.

Russell has worn many professional “hats” during her 15-year tenure at ASU, including Director of Marketing, University Editor, Vice President for Institutional Advancement, and currently, Vice President for Marketing and Strategic Communications. Russell, who is known for having a “can do” approach to each of her assignments, characteristically shifted the spotlight from herself and instead gave recognition for winning the award to others.

"I am both humbled and grateful to Dr. Vita Pickrum (Vice President of Institutional Advancement at Delaware State University and the founder of the Symposium) and her staff for selecting me for this honor. I accept the award on behalf of those who work every day in the Division of Marketing and Strategic Communications to help to advance the brand and vision of Alabama State University. I would also like to recognize the staff in the Office of Development, an area that was under my supervision for several years. We all work as a team to ‘advance the brand’ and leverage partnerships on behalf of Alabama State University. I am proud of what we have been able to accomplish as a team during my tenure," Russell said.

Delaware State's LaShawne Pryor, a senior leader of the event, believes that Russell's recognition is well-deserved.

"The award that Lois Russell won recognizes her as an advancement professional who has exhibited leadership and long standing service over many years to Alabama State University and overall to the nation's HBCUs," Pryor said. "Lois has also been instrumental in being able to help the Symposium grow and prosper and for all of these and for other factors, she is most deserving of this honor."

Alabama State's Russell believes that the information and networking provided by the Symposium is important to sustaining the nation’s HBCUs.

"The HBCU Philanthropy Symposium has been a great help to me in developing my skills as an advancement professional," said Russell, an Elba, Alabama native. "The symposium draws HBCU advancement leaders from across the country and affords us unique opportunities to engage with higher education partners and funders. I am extremely grateful to Dr. Pickrum for her vision in founding the Symposium and to the president of Delaware State University, Dr. Tony Allen, for hosting the event," Russell stated.

The HBCU Philanthropy Symposium celebrated its 12th year in Washington, D.C. at this year's recent event with the theme, “It’s Our Time: Building on the Historical Value of HBCUs.” The Symposium featured keynote speakers, presentations, and networking focused on how advancement leaders can ensure the sustainability and future of Historically Black Colleges and Universities (HBCUs). The conversations at the Symposium included ways to drive student success, enhance student-talent pipelines, career pathways, grow alumni engagement, secure scholarship money, and build innovative partnerships with other schools and the private sector.

The HBCU Philanthropy Symposium is an opportunity to convene the development and fundraising professionals of the nation's Historically Black Colleges and Universities to strengthen their network, engage with national leaders in philanthropic giving and build a broader, collective narrative for the HBCU ecosystem. The Symposium was founded by Dr. Vita Pickrum at Delaware State University. The event’s first meeting included just three schools and one funder. This year, organizers welcomed more than 50 schools, 300 network leaders, and a host of corporate partners that included such heavy-hitters as Disney, Mastercard, Vanguard, Diageo, Strada, CapOne, Kresge, as well as such impactful organizations as The Thurgood Marshall College Fund, Complete College America, United Negro College Fund, Association of Public Land-grant Universities, and others.

Lois G. Russell has an extensive professional background in communications. A 19-year veteran of the field of Broadcast Journalism, she has worked in various aspects of radio and television news. During her 12-year tenure at WSFA-TV in Montgomery, Russell was instrumental in the news department receiving numerous professional awards from various industry organizations such as the Alabama Broadcasters Association and the Associated Press. Russell earned recognition for producing the television station’s live news broadcasts of the 25th anniversary of Bloody Sunday in 1990 from the foot of the Edmund Pettus Bridge.

Russell left broadcasting in 1995 to become an instructor at a Montgomery private school where she taught high school English for 11 years. In 2006, she shifted to higher education, becoming the Director of Development for Amridge University, a position she held for nearly two years before being hired as Marketing Director at Alabama State University (ASU) in 2008. Her work at ASU has evolved over the years to include serving as Vice President for Institutional Advancement and her current position as Vice President of Marketing and Strategic Communications, a role in which she reports directly to the University President and oversees ten departments: News Services, Media Relations, Marketing, Creative Services, Social Media, Photography, Graphic Services, CommUniversity, Licensing and WVAS-FM radio station.

Russell has one son, Byron, who resides in Huntsville, Ala., with his wife Chrissy.