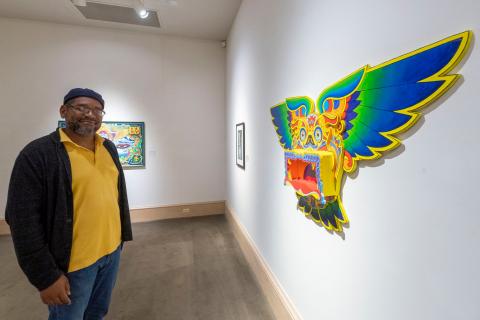 The artworks exhibited by two members of the faculty and a student of Alabama State University's department of Visual Arts have been both well received and honored by awards and accolades at the area's premier showcase of artistic expression, which is the Montgomery Museum of Fine Arts' 43rd annual Montgomery Art Guild Museum Exhibition.

The exhibition of contemporary art is on display now until July 21, and of over 300 works of art submitted for inclusion, only 72 were accepted, which included those by three members of the ASU Hornet Nation family --- with two of the three of their exhibited artworks winning awards, said Professor Nathaniel Allen, interim chairman of ASU's department of Visual Arts.

"I am genuinely thrilled that three pieces of art from ASU's family were accepted to be included in this most prestigious exhibit of contemporary art by Montgomery's Art Guild, and of the three, two pieces of our art won awards," Allen said. "However, I personally consider all three of ASU's artists in the exhibit as 'winners' since it was such a select and small group of artists whose works were selected to be presented in the Art Guild's museum exhibit," Allen added.

Among those honored by the Montgomery Art Guild as award-winners are Chairman Allen, who won an award for his mixed-media piece "Dragon Shelf;" as well as assistant Visual Arts professor, Elana Hagler, who won for her drawing "Seated Figure." ASU student art-major, Jamie Harris, also had one of her pieces included in the exhibit, which is a drawing titled "Carlesia Seated."

ABOUT THE EXHIBIT
The Montgomery Museum has worked with the Montgomery Art Guild since 1960 to present an exhibition of contemporary regional art in its galleries. The exhibition contains an exciting variety of media, subjects, and themes, representing what the Art Guild calls the “best of the best” artists within Alabama's River Region.