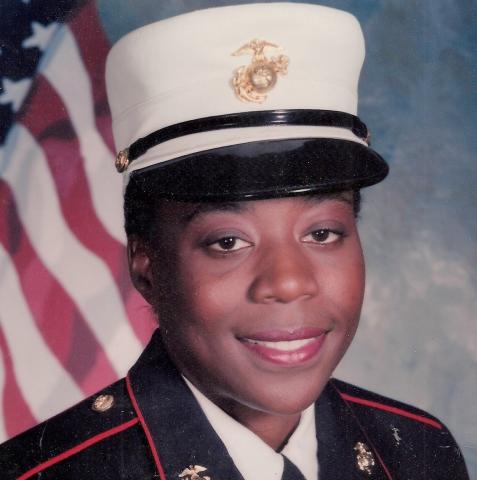 ASU's Andrea Rogers Mosley was a Marine during the Gulf War.

ASU Employees who are Veterans will be Honored

As fans are cheering the Hornets on to victory in Saturday’s (April 3) game against South Carolina State, they can also take time to honor those ASU employees who have served or continue to serve their country.

"Saturday is ASU's official Veteran's Recognition Day at the University and to commemorate it throughout the entire football game at various intervals, an image of a current ASU employee with their name and branch of military service will flash across the Jumbotron to honor them and symbolically all faculty, staff and administrators who honorably served in the military," said B.K. Haynes, ASU’s director of Veterans and Military Affairs.

Haynes said the tribute is the University’s opportunity to show appreciation publicly to those who have defended the nation in times of peace and war.

ASU VETERAN RECOGNITION WILL BE A YEARLY EVENT

Marion Brock, president of ASU's Non-Instructional Staff Council, and one of the organizers of the special recognition at Saturday's game, is a retired Army sergeant first-class.

"It is fitting to let our employees who are veterans know that we honor and appreciate them," Brock said by phone.

"This will be a yearly event that we hold on campus. It's a celebration that we wanted to have in October, but since the COVID-19 pandemic was the cause of no football games being played in the fall, we decided to hold the event now in the springtime since we are playing football on campus, which allows a sizable number of people to be on hand to see the recognition in person."

Andrea Rogers Mosley as an active duty member of the Marine Corps during the Gulf War.

DIRECTOR OF SBDC ONCE A MARINE DURING GULF WAR

Andrea Rogers Mosley now serves as the director of ASU's Small Business Development Center; however, in 1989-1993, she was a Marine corporal serving just a few miles from the combat lines in Kuwait during the Gulf War's Operation Desert Shield and Operation Desert Storm.

This mild-mannered business executive was formerly an expert marksman who went through her Marine Corps basic training at Paris Island, South Carolina, which is known as one of the world's most intense military boot camp training programs and not at all for the faint at heart.

"My Marine Corps training at Paris Island is something that made a lifelong impression on me, as did being on the border of Kuwait during the Gulf War," Mosley said. "All of my comrades-in-arms came back from Kuwait with some type of wound, whether it was visible or inward. It is something we must carry with us throughout our lives. Having my ASU show me publicly that it cares means a great deal to me."

HELP US RECOGNIZE EVEN MORE ASU VETERANS IN THE FUTURE

Haynes, the University's veteran's affairs director, is a retired Army colonel who served in combat in three different engagements - Afghanistan, Iraq and Bosnia-Herzegovina. He hopes to expand this ASU acknowledgment in the future with even more employees recognized for their military service.

"We have a large number of employees whom we know are veterans, but we also know that there are others that we have missed. I ask all who read this article to both tell our veterans how much they care about their service and to send us the names and departments of current ASU employees who are either veterans or current military so they may be included in our future events. They deserve our recognition, too," Haynes said.

Please send the names of current ASU employee who are veterans to the following email address: bkhaynes@alasu.edu.