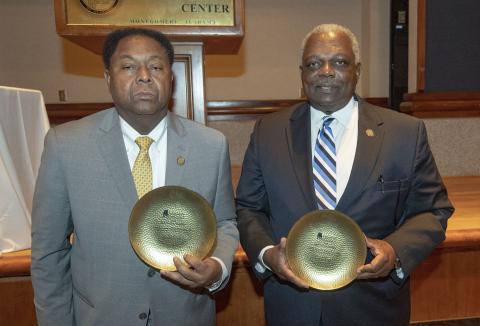 Circuit Judge Eddie Hardaway, Jr. of Sumter County and Circuit Judge Johnny Hardwick of Montgomery County share two important things in common other than an abiding love of equal justice and the law. Both men share strong connections to Alabama State University (ASU), and both men are among the newest inductees into the Alabama Lawyers Association (ALA) Hall of Fame, receiving this prestigious honor on Nov. 14 at the RSA Activity Center in downtown Montgomery.

Hardaway serves as a member of the University's Board of Trustees, and Hardwick is a 1973 alumnus of ASU, who also once served as the dean of Student Affairs and as an assistant professor of Management in the College of Business Administration.

Hardwick, who serves as the Presiding Circuit Judge for the 15th Judicial Circuit in Alabama, gives ASU a great deal of credit to his alma mater for the successful career that led to his being inducted into the Alabama Lawyers Hall of Fame.

"I have to credit The Alabama State University for what I learned as a student in the classroom and on its campus that contributed to the 42 years of legal and judicial experience, which ultimately led to my receiving this award," Hardwick said. "So many members of ASU's family nurtured and guided me to the next phase of my life, and for this, I am very grateful."

As the presiding judge of Alabama's 17th Judicial Circuit, Hardaway said he is very grateful to receive such an honor.

"Being a rural judge in West Alabama, I am deeply humbled and grateful to be in such company as those who have received this honor before me," Hardaway said from his court chamber in Sumter County. "I wish to especially thank my wife Lena and my former law partner, Judge John England, who was a major influence in my legal career, and is my mentor."

Marcus M. Maples, president of the Alabama Lawyers Association, presented the awards to Hardaway and Hardwick, and two others: Robert Turner, Sr., of Marion, Ala., and posthumously to William Hooper Councill. Maple says that the association and the award recipients stand for those in Alabama who were historically underrepresented.

"Without their dedication to their careers, their passion for their communities and service to their clients, our world would be quite different," Maples said. "It is for that reason that the ALA has chosen to induct them into the Hall of Fame.”
--