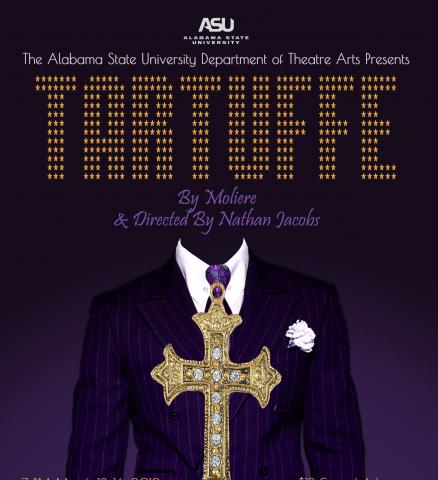 Originally performed in 1664,"Tartuffe” takes the classic story of a religiously pious, manipulative impostor. In doing so, the playwright has created a parody that resembles the age-old story and history of social interaction.

“As the director...I am merely hoping that this play both entertains and reminds us that not everything is what it seems,” said Nathan Jacobs, assistant professor of Theatre. “I hope audiences laugh, feel, and think during and after the performance.”

Jacobs is excited to provide various performance materials to majors in the ASU department of Theatre.

“Our students are absolutely amazing. I’ve had the opportunity to direct them in plays not written with African-American characters and they have not surprised me in how they embrace the material skillfully and make the characters come alive,” said Jacobs. Some of the plays Jacobs refer to are “A Streetcar Named Desire” by Tennessee Williams; the British comedy “Noises Off!” by Michael Frayn, and the current offering of “Tartuffe.”

Junior Theatre major Sekeedrick Blakely said he is thrilled to work with Jacobs.

“I really enjoy working on plays with Mr. Jacobs because he always directs something we don’t expect and that can be very challenging,” Blakely said. “But it’s always worth the hard work. This type of training will most definitely come in handy with all I plan to do with my future. So I’m grateful.”

Blakely, a native of Waynesboro, Miss., plans to work in theatre, television, film and music when he graduates from ASU.

“Tartuffe” features actors and crews from every class of theatre majors, from freshmen to seniors. The collaborative process calls on the entire technical faculty to bring “Tartuffe’s” world to life. Departmental faculty and staff working on the show include Ramona Ward (costumes), Charles Moncrief (set design and props), Anthony Adams (lighting and sound/production manager), and Matt Dickson (technical direction and set construction). Students who are enrolled in hands-on training courses also play a major role in the production process.

Uvaleious McGhee, a theatre major and a student-athlete on ASU’s football team, works alongside faculty and staff in his newly claimed major.  “I’m new to the department, but I really enjoy being over here. I believe this will only enhance my future,” McGhee said.

General admission is $12 and $6 for students with a valid ASU I.D.