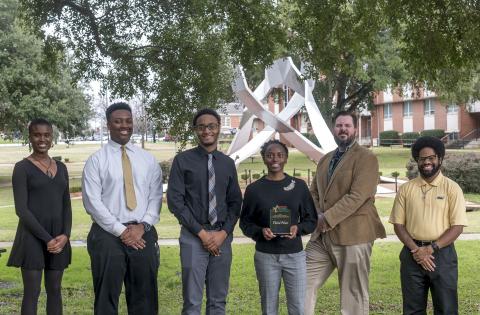 The Alabama State University's  2020 Honda All-Stars team poses for a photo on the campus mall,Tuesday, Feb. 11, 2020. The team will head to California for the national competition in March. Pictured from l-r are Nailah Thomas, Jayden McCall, Wyman Kirby, Endia Harris, Dr. Mark Hill, and Elijah Stewart.

“We took third in the regional competition at Morgan State while handicapped with one player missing, but we won't have that problem at the national tournament,” said Dr. Mark Hill, team coach and associate professor of English.

The ASU team will compete in a fast-paced buzzer question-and-answer game that combines academics, pop culture, African-American history and sports in a format emphasizing quick recall. The team has the opportunity to win the HCASC top prize – a $75,000 institutional grant from Honda.

To prepare for the nationals, the ASU team will study two to three times a week with resource materials, books and games, in addition to scrimmaging with other nearby institutions.

“It is more of a club than an exclusive organization,” Hill said. “Historically, only the honors students were aware of its existence, but we take anyone who likes trivia and competition.  There is also scholarship money available.”

Honda established the Honda Campus All Star Challenge in 1989 as a way to highlight and recognize the academic talents of HBCU students. More than $9 million in grants from Honda have provided support for books and tuition, scholarships, enhancement of student programs and other investments to improve campus facilities.

“I cannot express my appreciation enough toward American Honda for working with so many HBCUs over the past three decades,” Hill said.  “Their generosity has allowed countless students not only academic opportunities, but a community of connections that is as strong as any other organization I've seen.  I am proud to have worked with the program for the past five years, and I look forward to seeing Honda help future generation of students build careers, lives, and families through its program.”