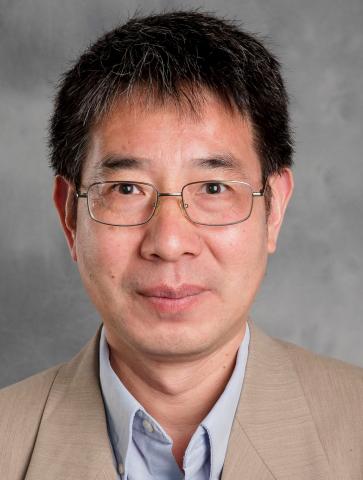 Annual Research Frontier Symposium Awards Top Honors to Seven ASU Students!
- Held virtually from ASU, its theme was "Collaboration in STEM Research."
- Nobel Laureate in Chemistry was this year's keynote speaker on COVID-19 vaccines.
By: Kenneth Mullinax/ASU
Several Alabama State University student-scholars were presented with the lions-share of awards earned at the annual Research Frontier Symposium (Symposium) that was recently held in a virtual format from the ASU campus. It had as its theme 'Collaboration in STEM Research.'
Of the 12 awards presented to students in both the oral and poster categories at the two-day event, seven went to Alabama State students, according to the chair of the Symposium's organizing committee, Dr. Harvey Hou, a professor of Forensic Science in ASU's Laboratory of Forensic Analysis and Photosynthesis. Hou is known as the guiding light behind this event that was founded at ASU.
"We were most gratified to see such a large number of the University's students place so well from among such a wide array of exceptional students from many different schools and states," said Hou.
Among ASU's seven symposium winners, the following three won in its oral category: Zoe Hayes (undergraduate), Donchel Boone (Master of Science) and Ayodeji Ipinmoroti (Ph.D. student). The University's four winners in the poster presentation category were Moriah Jones (undergraduate), Breaunna Davis (Master of Science), Charkira Patrick (Master of Science), and Md Imam ul Khabir (Ph.D. student).
ASU CREATED THE STEM-RELATED SCHOLARLY EVENT
Hou said that the Symposium is an ASU-initiated regional conference that highlights scholarship in the STEM (Science, Technology, Engineering and Math) research fields with a goal of increasing students’ interest and enrollment in STEM research and studies.
The Symposium's international advising committee consists of members from several other universities, including Yale University, Rockefeller University, Pennsylvania State University, Russian Academy of Sciences, University du Quebec at Montreal, Clemson University, University of Alabama, University of Alabama-Birmingham, Huntingdon College and Auburn University.
NOBEL LAUREATE WAS THIS YEAR'S KEYNOTE SPEAKER
Over the past few years, ASU's Research Frontier Symposium has grown from being a single-school symposium to a multi-state regional conference, which continues to attract more cutting-edge scientists, experts and leaders of science.
The keynote speaker at this year's plenary event was Dr. George Smith, the 1988 Nobel Prize Winner in chemistry. His virtual remarks centered on the critically important and relevant topic of vaccines for pandemic diseases.
“This symposium provides an oasis of scientific possibility,” said Dr. Carl Pettis, ASU’s provost and vice president for Academic Affairs. “The 2021 annual research symposium is a true example of ASU’s pursuit of excellence.”
Hou shared that in addition to Nobel Laureate Smith's discussion, the ASU-based event had more than 24 additional STEM-related talks via Zoom from a large array of well-known experts in science from an impressive list of  prestigious institutions, including Vanderbilt University, Yale University, The National Cancer Institute, University of Alabama, University of Lucknow in India and Alabama State University.
STEM STUDY HELPS ADVANCE STUDENTS
Hou believes that ASU's annual Symposium provides an accessible platform to students to observe world-class level scientific research.
"It is our goal for this event to attract more students into the STEM fields, as well as to celebrate students' outstanding achievements within this field of study," Hou said.
"The future success in employment for our students most certainly involves the use and application of STEM study. We must do all we can do to train students to effectively become more competitive in their future professional development and within the job market by mastering STEM topics."
The 2021 Symposium's webpage: https://sites.google.com/a/alasu.edu/arfs-2021/
News media contact: Kenneth Mullinax, 334-229-4104.
###