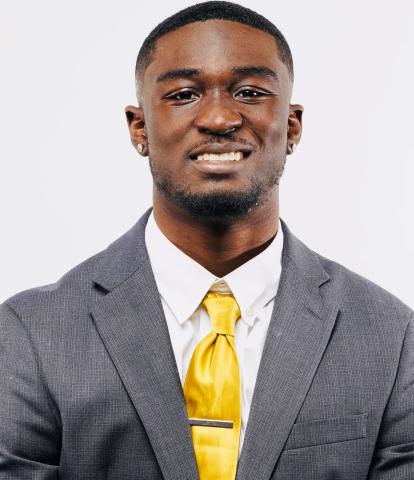 - Students must be nominated by their school, vetted by Governor's Office of Minority Affairs and hired by employer.

A longtime employment maxim states that "it's not always what you know, but whom you know." That adage could hold true for two Alabama State University students who have the academic knowledge and are about to get the "know" by networking with plenty of corporate executives in the new co-op positions they were awarded through Alabama's HBCU (Historic Black College or University) Co-Op Program, sponsored by Governor Kay Ivey's Office of Minority Affairs.

ASU students Juene "Jay" Knoll Franklin, II and Camille Zanders are among the first seven students selected to participate in the Governor's program this year. Both ASU students will work in Montgomery: Franklin, a senior, has been hired by the Warren Averett Accounting Firm, and Zanders, a sophomore, will be working at the Alabama Department of Archives and History.

ABOUT THE CO-OP PROGRAM

Alabama State's director of Career Services, Dr. Sabrina L. Crowder, is the contact at the University for students interested in being nominated for a position in the co-op.  She explained that it was established by the Governor's Office of Minority Affairs in 2019 with a goal of ensuring that minority students and institutions across the state are connected with Alabama's best public and private employers.

"The vision of this program is to allow the University the opportunity to have its most talented students to be hired in co-op employment positions by some of Alabama's premier employers, which helps the students gain important career contacts," Crowder said. "The HBCU Co-Op Program is a three-way partnership between Alabama State University, the Governor’s Office of Minority Affairs, and employers in both the public and private sectors."

According to Crowder, minority students at the University who have a 3.0 or higher grade point average are encouraged to apply for an opportunity through ASU's Office of Career Services.  All who wish to be considered must be full-time students, belong to a racial and/or ethnic minority group, be at least 18 years of age and have completed their first year at Alabama State University.

"The Alabama HBCU Co-Op Program is good for ASU and HBCU students alike because it provides hands-on work experience in the public and private sector for all eligible minority students of all majors. The program is a public-private collective that addresses the under representation of minorities in key roles in certain industries including, but not limited to, science, technology, engineering and mathematics," Crowder stated.

The director of the Governor's Office of Minority Affairs, Nichelle Williams Nix, stated that employers who hire students nominated by their school and vetted via her office, are awarded paid experiences for a period of one to three semesters; with an opportunity to make between $15 and $19 an hour, while still being a full-time student.

"Our program is important for Alabama's HBCU students because a lot of our talent among our community tends sometimes to be overlooked, as well as we also lose lots of good students who upon graduation take employment positions in other states," Nix said. "This program is an effort to retain these talented students in Alabama after they graduate and get them to begin their careers here. We want them to stay here and contribute to Alabama."

One of ASU's students selected for a co-op position this year, Jay Franklin, believes that this program is important for students and also helps employers to be more inclusive.

"This program helps our community's students who are soon to be in the workforce get the type of experience needed to better compete and be more successful in professional positions," said Franklin, a native of Houston, Texas. "Because minorities are underrepresented in corporate America, we have a smaller degree of life experiences within the workforce, which helps a person to obtain the most successful positions. This HBCU Co-Op Program allows us to gain the one-on-one introductions to the important people within our fields, as well as have solid job preparation, networking, core-job experiences and expertise, which is priceless in giving us the advantages that others may take for granted."

Franklin said that when his co-op position with Warren Averett is complete, he already has a job offer that would allow him to stay in Alabama.

"I will begin work after I graduate with Wells Fargo; with training in North Carolina and then moving to my full time job in Birmingham, Alabama," Franklin said. "Getting any good job is tough, but it's especially tough for people of color. Because of Alabama State University allowing me to participate in this important co-op program, I will be getting the type of employment experience that will help me sharpen my corporate skills and allow me to be that much closer to being a success in corporate America."
News media contact: Kenneth Mullinax, 334-229-4104.
###