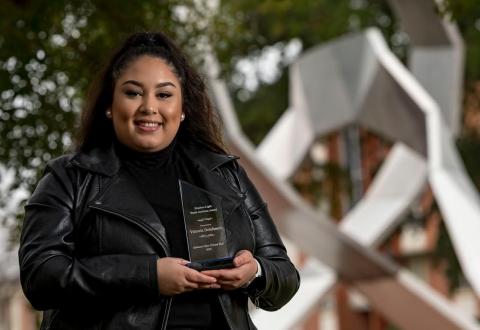 ​
By Kenneth Mullinax/ASU.
An Alabama State University student's leadership and commitment to the high ideals of equal justice and equal treatment to all people regardless of their sexual orientation was honored Feb. 16, at the 21st annual "Vigil for Victims of Hate and Violence."  The award ceremony was moved from the steps of the Alabama State Capitol because of rain to the Unitarian Universalist Church on the Atlanta Highway in Montgomery, Ala.
Victoria Delafuente received the 'Stephen Light Youth Activism Award,' given for her leadership, service and commitment to LGBTQ youth said Dr. Davida Haywood, ASU's vice president for Student Affairs.
"Victoria has been quite active in the local community, and was lauded for her much needed contributions, both on campus and in the River Region, to LGBTQ youth," said Haywood. "This is the second time that an ASU student has received this honor. The first, was Caleb Gumbs in 2016," Haywood added.
Delafuente is an ASU junior from Houston, Texas and is a psychology major.
WINNING THE AWARD BROUGHT TEARS TO HER EYES
She was awestruck to discover that she had been both nominated for the award and its winner.
"I never expected to win any recognition for doing the right thing; for being kind, for not judging people and respecting differences in people," Delafuente said. "This award was a huge surprise to me, which brought tears to my eyes and joy in my heart," Delafuente added.
THANKS ASU FOR ENCOURAGEMENT
She said that the encouragement and support that she receives on the ASU campus was a contributor in helping and motivating her involvement in equal rights for all people.
"ASU is my family and I appreciate all of the faculty, staff and students who were contributors in helping me win this award,"  Delafuente said.
"It is all about love and respect for other people."
###